A 312-metre-long concrete wall provides the framework for this house and art centre designed by Japanese architect Tadao Ando for a picturesque site on the Mexican seafront (photos by Edmund Sumner + slideshow).

The building provides a home for the Casa Wabi Foundation, an arts charity established by Mexican artist Bosco Sodi and directed by Patricia Martin, best known as the curator of Latin America's largest private art collection, the Colección Júmex.

The plan is laid out like a giant compass. The long concrete wall runs west to east, following the coastline, to create a series of different rooms and zones.

The north-south axis is provided by an approach road, as well as a long narrow terrace and swimming pool that extend out towards the water's edge.

"With such a generous length of site, I have created a single concrete wall of 312 metres long by 3.6 metres high," he said.

"The wall also generates the main circulation path cutting across every programme, serving as a dual interior and exterior wall," he added. "Rich red and orange sunset is to be reflected on the concrete surface."

The main building forms the centre of the cross formation. The concrete wall splits the interior into two halves, with reception spaces on the north side and living areas to the south.

The largest space in the building is a grand living and dining room, featuring a huge wooden dining bench and a slightly sunken lounge facing out towards the ocean. It leads out to the terrace and its two swimming pools – a long narrow pool for lengths, and a triangular padding pool.

The family living quarters for Sodi – who divides his time between Mexico and New York – occupies a pair of triangular spaces tucked away on one side on the living room, screened behind more concrete walls.

To contrast with the starkness and linearity of the walls, the roof is covered with layers of dried Royal Palm Tree leaves, commonly used in the region because they provide shelter while also allowing natural ventilation. 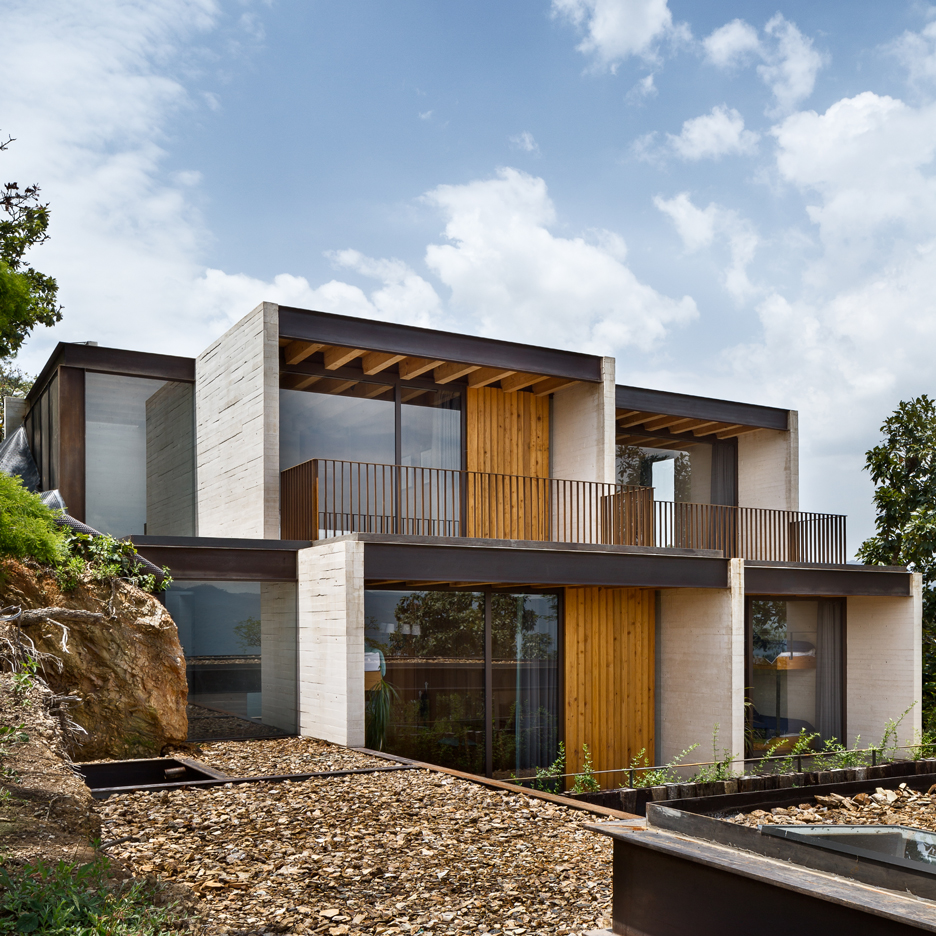 Buildings with these types of roof are known locally as Palapa.

"Most of the interior spaces have no distinction from the exterior other than the Palapa roofs hovering over them," he added.

Other buildings on the site include a series of six small cabins that function as guesthouses, each modelled on a traditional Palapa. They are located at the western end of the site, along the south side of the wall.

To the east of the main house, a long narrow building functions as a large exhibition gallery, while a separate structure beyond forms a large studio for Sodi and other resident artists.

There is not a single pane of glass anywhere around the site, and the only mechanical ventilation installed is in the gallery. The aim was for the house to feel as exposed to nature as possible.

Two materials were chosen for flooring: a mix of granite and marble known as marmolina, and a Mexican hardwood named parota.

"This is a very unique project with use of various uncommon materials, allowing me to create architecture and spaces that cannot be created other than in this location," added Ando.

Tadao Ando became famous for a series of projects that exploit the role of light and shadow in architecture, from his Church of the Light in Osaka to his Naoshima Contemporary Art Museum, and was awarded the Pritzker Prize in 1995.

In recent years he has taken on several projects in North and South America. His school of art, design and architecture at the University of Monterrey opened in 2013, and he added a new building to the Clark Art Institute in Massachusetts in 2014.

Casa Wabi, which also goes by the name Bosco Studio and House, opened in late 2014. It has become a new centre for the local community of Puerto Escondido, as well as a popular retreat for other artists.