Locally based Abraham Cota Paredes Arquitectos designed V House for a built-up plot on the outskirts of Guadalajara, a city in Mexico's Jalisco state.

Its 355-square-metre plan is arranged over two levels, and an eight-metre height difference between the front and back of the site affords the rooms at the rear views over the city.

The internal patio splits the house into two and also provides a private outdoor space for the family. It hosts a single tree and a pool of water, and is enclosed on four sides but left open to the sky to provides the house with natural light and ventilation.

The tall window with a wooden cross-shaped frame spans the height and breath of one side of the patio to create a "spatial continuity or fluidity" between the ground and first floors.

This design takes its cues from a similar window found in Casa Luis Barragán, the self-designed residence of the late Pritzker Prize winner Luis Barragán, who was born in Guadalajara.

"A wooden cross reminiscent of Barragán seems to float in space, framing the patio," said the studio. "Water, tree and light, fill the space with an aura of serenity."

The dark wood of the window frame is repeated in the stair treads that cantilever from the white wall opposite the patio and in a wide pivoting door that forms the entrance. 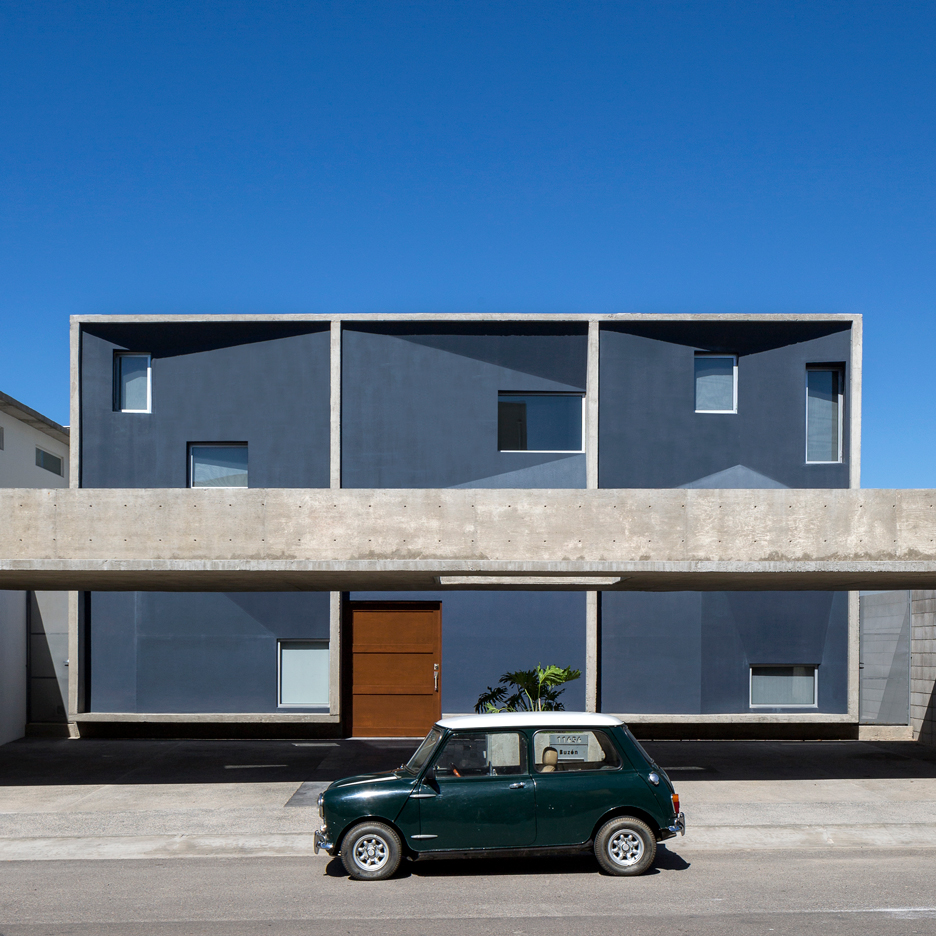 This detailing offsets the white walls and pale marble used to finish the rooms throughout.

The house has a top-heavy structure created by a recess at ground level that provides a sheltered parking spot. A second recess in the overhanging first-floor level provides a balcony that provides views of the street.

This top-heavy form follows the form of another residence by the firm in the Mexican city, an introspective house that frames views of the sky and garden instead of the street.

"Formally the house seeks to be a solid with the least possible subtractions," said Abraham Cota Paredes. "Two subtractions generate the main facade."

A bedroom and en-suite bathroom sit behind the windowless facade to one side of the ground-floor entrance, while an open-plan living space with a large floor-to-ceiling window occupies the back two thirds of the space.

Three further bedrooms are set around the stairwell on the first floor. Two are connected by the street-facing balcony but the third i at back of the site.

A further flight of steps leads to an orange-tiled roof terrace, where low white walls permit views to the east over the city and a white steel pergola will eventually provide a climbing frame for planting.

Photography is by Cesar Béjar.