This concrete house in Mexico by New York- and Tijuana-based T38 Studio is organised as a nine-square grid with a courtyard at its centre (+ slideshow).

The property, referred to as HDJ89, is the 12th infill project the firm has designed in Tijuana's HDJ district.

Each side of the 3,175-square-foot (295 square metres) building is made from a six-part concrete frame. Windows of differing sizes are inset in a black background within each of the faceted sections.

A reflecting pool and a tree fill the courtyard, which is visible from the entrance. The courtyard opens on one side to an outdoor terrace, extending the view straight through the house to the city beyond.

This degree of transparency is usual in Mexico, where security concerns often create fortress-like conditions, according to the architects.

"Being able to convince the clients that openness can bring more of a sense of security than tall walls and gates [was key]" Alfonso Medina, founder of T38, told Dezeen. 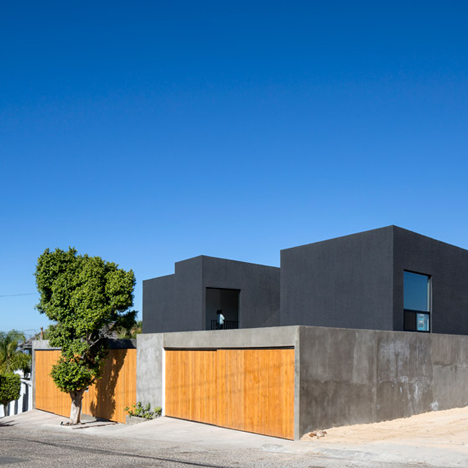 A channel runs from the courtyard out under the terrace to a larger outdoor lap pool. "The same floor that sits on the sidewalk goes all the way through the central part of the house, ending on the pool," added the architect.

The living, dining, and kitchen areas flank the other sides of the courtyard. Bedrooms are located on the floor above.

The house has a monumental carport with a massive concrete roof rather than an enclosed garage. The roof of the carport has cut-outs that allow a shaft of light through, creating a play of shadow and daylight.

Unlike many of its stark white neighbours, the house's black and grey exterior nearly disappears at night, highlighting the staggered windows when the interior is illuminated.

"Even when you were going from one inside space to another, the objective was to accentuate the different programs of the house by establishing a relationship to the exterior each time you went from one space to another," Medina told Dezeen about another courtyard house he designed nearby in Tijuana.

The firm operates a design studio in New York, and a design and build operation in Mexico, where its is able to draw on the country's inexpensive but high-quality craftsmanship.

"The concrete slab over the entrance of HDJ89, which has a span of 46 feet (14 metres), had an amazing wood formwork," Medina said. "It was even more complex than the concrete structure itself, and those are the components that are designed by the local craftsmen."

Other recent examples of contemporary houses in Mexico include a residence of stacked concrete boxes by Taller Hector Barroso and house with under-stair storage and pine joinery by Delfino Lozano.