Bands of timber alternate with slices of glazing across the facade of this Tokyo house by Swedish studio Elding Oscarson, offering a degree of privacy while also exploiting views of the garden (+ slideshow).

The Stockholm studio designed Nerima House as a weekend house for a couple who will eventually relocate to the city permanently.

The house will also be inhabited from time to time by the clients' grown-up children, who are based in Tokyo and abroad.

Gardens belonging to a small house that previously occupied the plot were retained and a parking space created, forming a gap between the house and the perimeter of the site on all sides.

"The program was fairly unspecified and rather than making a house with many small rooms, we opted for a concept which gives a few large spaces in this small house," said studio co-founders Jonas Elding and Johan Oscarson. 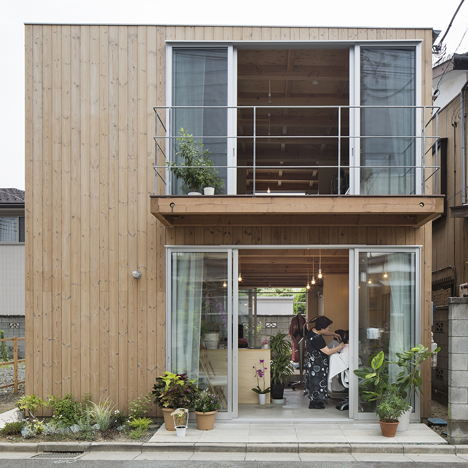 The ground floor contains a bedroom, separate bathroom and toilet, as well as storage and utility rooms, and is slightly sunken to appreciate views into the garden.

"The ground floor is sunken a bit into the ground to find a new relation in absolute proximity to the garden, a new perspective to contemplate the greenery and an untraditional openness to the gap around the site," explained the architects.

"The uninterrupted glass slit around the entire ground floor means that the house is opening up to all sides, to wide and narrow garden spaces, as well as to the street," added the team.

A white staircase leads to an open-plan living space on the first floor, which has high ceilings and glass walls. Green-tinted drapes can be drawn around the entire floor to screen the glass.

The first floor is set at a lower level than is typical, due to the semi-sunken nature of the ground floor – a feature intended to make residents feel close to the garden wherever they are in the building.

"This big first-floor room is open to all sides with a glass slit, providing a sense of being semi-outdoor, enjoying a 360-degree panorama of the site, the treetops, and the sky," said the architects.

A second flight of stairs leads a narrow landing adjoining the decked roof terrace, which hosts a selection of tall pot plants.

The pair has previously completed several projects in their native Sweden, including a seaside residence with an entirely glazed ground floor and an office with a glossy spiral staircase.

Photography is by Kenichi Suzuki.