US design-and-build firm Go Logic has completed a summer house on the rocky coastline of Maine made up of three wooden cabins, each linked by terraced decks (+ slideshow).

Located near the waterside in Vinalhaven, the 890-square-foot (82 square metres) house comprises a main building with living and dining areas, and two freestanding bedroom structures linked by decks.

Named Little House on the Ferry, the buildings are made entirely of factory-cut cross-laminated timber (CLT) panels – a type of engineered wood made by layering up sections of wood – which were brought to the island site by boat.

"We thought it would be a good project to try using CLT for the first time," explained Go Logic architect Riley Pratt, whose firm also recently completed a field station in Michigan.

The pre-cut pieces made for easier transport and assembly on the remote location and rugged terrain.

"It was great. The precision was spot-on," Pratt told Dezeen.

"The owner refers to them as her monopoly houses," said Pratt. "You see them on the hillside when you come in from the ferry. They're meant to weather and fit into the landscape."

Vinalhaven is home to an active lobster-fishing village filled with similarly proportioned structures. 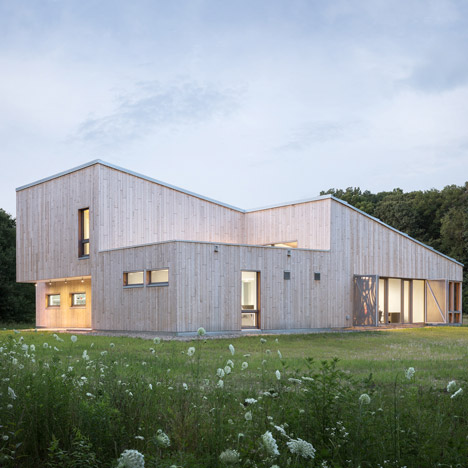 All three cabins are set at different levels to follow the topography of the site, formerly a quarry. In plan the three structures form a U-shape, creating some enclosure while maintaining separation between each unit.

"It provides a bit of autonomy for the bedrooms, which makes it great for hosting guests," Pratt said.

Sliding glass doors offer expansive views out of the rocky, wooded landscape, as well as the water in the distance.

"There are specific views set up by the arrangement of the buildings," Pratt said. "One of the bedrooms aligns with a cut in the quarry rock, which gives the building a more specific, embedded feeling."

Ample cross ventilation keeps the buildings cool and energy costs low. Sliding wooden shutters provide sun control and allow the house to be secured in the winter when it is not in use.

Inside, the spaces are painted all white and the furnishing are kept spare, emphasising the views outward.

GO Logic is the latest in a series of architects and designers to embrace CLT construction, whether for houses or high-rises. Other recent examples include a Chicago pavilion and a proposed 12-storey tower for Portland, Oregon.

Photography is by Trent Bell.