Maison&Objet 2016: French fashion designer Jean Paul Gaultier has plucked his initials from a collection of alphabet-shaped chairs and used a distressed-looking fabric to upholster them.

Gaultier, best known for his provocative haute couture, has customised the J, P and G versions from the Typographia seating range by French brand Tabisso.

The special editions are called Nature et Découverte, and have faux-suede covers patterned to looking rust.

Supplied by Lelièvre, the soft fabric was chosen to contrast with the rough appearance of the green and red oxidising metal.

Tabisso first launched the Typographia range, designed by its in-house team, in April 2015. The collection includes lounge-chair versions of all Roman letters and numbers, as well as a set of floor lamps modelled on 20 different punctuation marks. 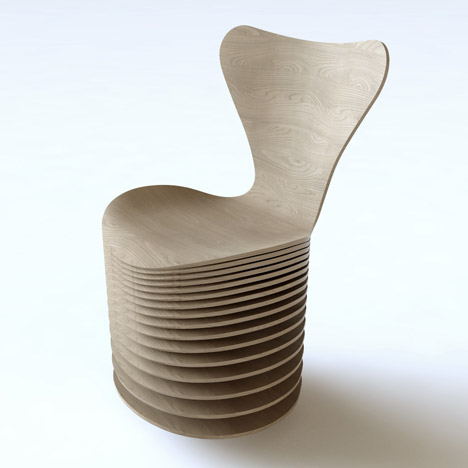 The letters are translated into soft, curved forms that provide both seat and back. Each is supported by a wooden sheet and sits on a metal base.

Gaultier, 63, is known as the enfant terrible of French fashion. His most recognisable designs include Madonna's infamous cone bra for her 1990 Blond Ambition World Tour, and costumes for 1997 sci-fi film The Fifth Element.

He served as the creative director of fashion house Hermès from 2003 to 2010, and continues to create dramatic haute-couture collections for his eponymous line each season.

Gaultier is one of many famous names to have designed a plastic shoe for Brazilian brand Melissa, and was appointed creative director of Diet Coke for Europe in 2012.

His editions of the Typographia chairs were launched at the Maison&Objet trade fair, which took place outside Paris from 22 to 26 January 2016.

Also presented at the event were Front's collection of wallpaper based on cut-out paper shapes and Héctor Serrano's clock for Lexon that features a baby alarm that pops out of its top.