Hall McKnight, 6a Architects and DRDH Architects are among the studios to have revealed their shortlisted designs for the overhaul of St Hilda's College at the University of Oxford (+ slideshow).

London studios Gort Scott and Tim Ronalds Architects join 6a Architects, DRDH Architects and Hall McKnight on the shortlist, which was announced in October.

The teams have now for the first time revealed their proposals for the £10 million renovation and extension of the riverside college in Oxford, England – part of one of the UK's most prestigious universities. 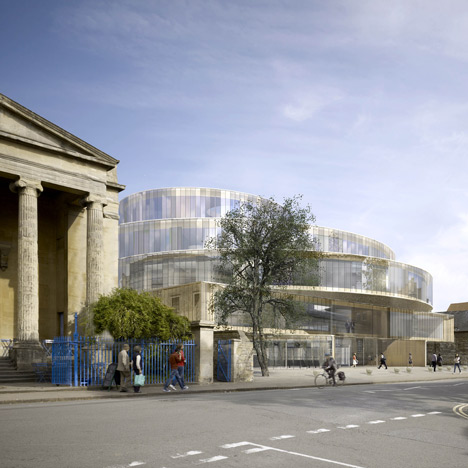 The project was commissioned to celebrate the college's 125th anniversary. It will increase the amount of accommodation for students and live-in fellows, as well as providing new teaching spaces, a common room, porters' lodge and entrance.

"The brief was demanding and each team has responded with a different analysis of priorities and design opportunities," said Gordon Duff, principal of St Hilda's College.

"We are keenly aware of the legacy we give to future generations as well as the opportunity to enhance Oxford itself."

"This initiative is all about reimagining this beautiful site and creating an academic environment which is pleasing and satisfying to use, and which enables the college to flourish over the next 100 years."

The design drawn up by 6a Architects centres on a crescent-shaped colonnade facing the river, while DRDH Architects' plan takes a more linear approach with a series of pale blocks with gridded facades.

Hall McKnight has opted for pale brick buildings, with arched cut-aways and a rooftop observation deck, and the fifth design by Tim Ronalds Architects is a red brick block with pale grey detailing and wide windows that open onto a long balcony overlooking the river.

"Each takes a different approach in celebrating the new gateway to the riverside site, combining this with a sequence of academic and residential accommodation that will give St Hilda's an assured new building," said competition organiser Malcolm Reading of Malcolm Reading Consultants.

"The submissions sparkle with enthusiasm and ideas, which are passionately argued and beautifully presented," he said.

St Hilda's College was set up by Dorothea Beale in 1883 in an 18th-century house and has had several extensions in the intervening years. It was the University of Oxford's last all-female college until 2008, when it began admitting male students and fellows.

The concepts will be on show at the college between 1 and 12 February. The winner is expected to be announced in late March.

Other schemes taking place at University of Oxford colleges include Herzog & de Meuron's disc-shaped school of government and public policy, and a new campus with a curving roofline for Exeter College by Alison Brooks Architects.