Photographer Eduardo Iborra Wicksteed and his wife Belinda asked Mesura to extend their home, named IV House, which is located in the countryside outside the city of Elche.

The area's hot and humid climate led the architects to design a long brick extension with a vaulted roof, which extends over a new lounge and bedroom, as well as a patio, to create shade.

"The site consists of an existing home in the centre of the field, leaving undefined surroundings: bad quality spaces and no exterior-interior relationship," the architects told Dezeen. 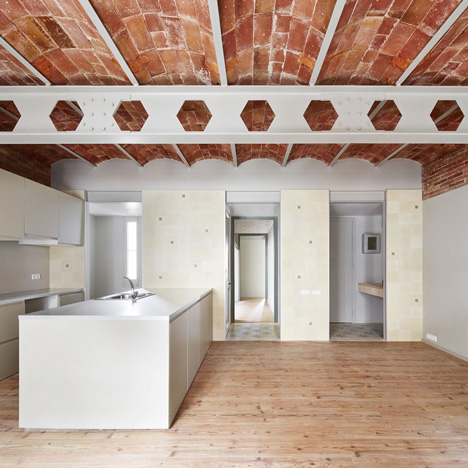 "A new space, sheltered under a vaulted mantle gives new life to this house."

Each of the four curving vaults covers a different part of the extension. The aim was to break down the hierarchy between interior and exterior spaces by giving equal importance to each part of the plan.

"The intention is to separate the lived spaces of intimate spaces in relation to the climate, solar orientation, visual, topography and vegetation," explained the architects.

A bedroom with a free-standing bath overlooks a private courtyard by the property's tennis court at one end of the extension. Its sliding glass doors are protected from view by perforated brick screens.

The glazed lounge opens onto the patio at the opposite end of the block, where the upper branches of an existing tree extend through a gap in the curving roofline.

The two parts of the building are separated by a bathroom block, and linked by a narrow corridor to the existing house, where there are three further bedrooms and a large kitchen.