Fernando Menis mixed concrete and broken red brick – a technique he calls picado – to create the cave-like interior of the CKK Jordanki concert hall, which is intended to provide optimum acoustics during music performances.

"Besides achieving a rough expression, the picado allows excellent acoustics results," said Menis, who first experimented with the technique for the Tenerife-based Magma Art & Congress in 2005.

"The expression is more convincing, forceful and precise, the outcome has been finely tuned through advanced research."

"Thanks to its dynamic ceiling, the building can be tuned to effectively absorb symphonic performances, chamber, theatre, opera, and film and meet any acoustic requirements the theatre designer requires," he added. 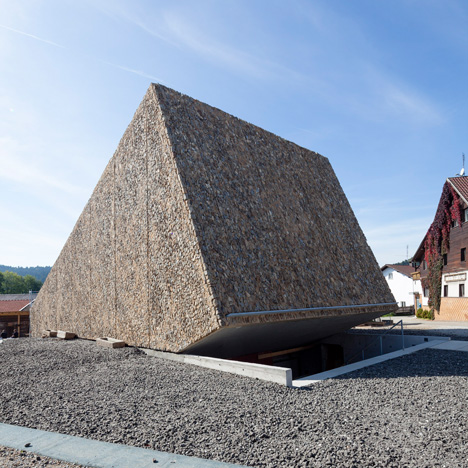 Menis won a competition to design the 21,800-square-metre concert hall for the UNESCO-protected town of Toruń in 2008. The proposal also won first place in the Future Projects: Cultural category at the World Architecture Festival in 2010.

Set between the medieval and new parts of the town, the building's small stature is intended to help it blend with the scale of existing architecture, while an arc of greenery retains views to a river.

Cutaways in the facades allow areas of the venue's red brick lining to peep from beneath the pale concrete shell – a reference to the traditional brick properties in the town's historic centre.

Menis likens this feature to the experience of eating Zurek – a popular soup dish in Poland that is served in a hollowed loaf.

"While the concert hall's outer skin remains rigid, inside, the building acts like a fluid that brings together the different functions, its many different co-existing elements, slowly combining them and playing off each other," he said. "The visual effect achieved is that of a natural object, a rock."

Partition walls and removable seats mean the two concert halls within can be joined or separated to suit type different types of performance or for larger spectator numbers.

"I wanted to make an auditorium that has the best efficiency possible, one that can adapt to different events and various capacities for public, and even to be able to house several independent acts simultaneously," said Menis. "It may change from performance to performance, like a sponge."

The stage can be opened onto the park for outdoor performances and concerts during larger gatherings.

Fernando Menis founded his Tenerife-based studio in 2010. Past projects by the office include a church lined with crushed volcanic rocks and an underground museum with a public square on top.

Photography is by Jakub Certowicz.