For the 2016 edition of the YAP programme – which invites emerging architects to propose a temporary structure for the MoMA PS1 gallery – Lazbent Pavel Escobedo and Andres Solíz propose a site-specific installation entitled Weaving the Courtyard.

The architects plan to use the existing holes in the courtyard's concrete walls, created when they were cast, as the framework for a woven canopy made up of brightly coloured rope.

Billed as "a cloud of contrasting yet colourful ropes", the canopy will feature different amounts of density – offering varying degrees of shade. A wading pool will be located underneath, providing visitors with a cool place to escape the summer heat.

Escobedo and Solíz claim the installation will be "neither an object nor a sculpture standing in the courtyard, but a series of simple, powerful actions that generate new and different atmospheres". 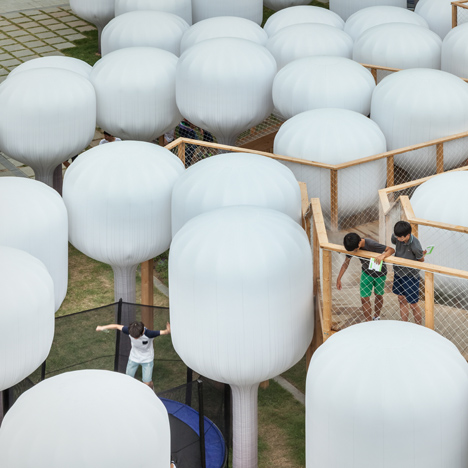 It will provide the backdrop for the gallery's summer music programme, known as the Warm Up sessions.

All the materials used to build the installation will be largely unaltered by the construction process, so they can be reused when it is taken down at the end of the summer.

"This year's finalists of the Young Architects Program explored a range of approaches, materials, and scales to effectively question the MoMA PS1 courtyard as an arena for escape," said Sean Anderson, MoMA's associate curator of architecture and design.

"Escobedo Solíz's ingenious proposal speaks to both the ephemerality of architectural imagery today but also to the nature of spatial transactions more broadly," he added. "From the evocative woven canopy that will engage visitors overhead to a reflective wading pool, Weaving the Courtyard sensitively brings together elements of MoMA PS1's Warm Up Series with an exuberant collection of zones and environments."

Escobedo Solíz Studio was selected for the projects from a shortlist of five finalists, also including Frida Escobedo, Ultramoderne, Cobalt Office and First Office.

Opening in early June, Weaving the Courtyard will mark the 17th year of YAP, which began in 2000. Previous commissions for the programme include projects by HWKN, SO-IL and Andrés Jaque, who created last year's water filtration plant project.

"This year marks the 40th anniversary of MoMA PS1 and the 17th joint annual competition brought together by the Architecture and Design Department at MoMA and MoMA PS1," said MoMA PS1 Director Klaus Biesenbach.

"The Mexico City-based team will work on a colourful, celebratory intervention that takes its point of departure to be the existing geometric concrete forms in the courtyard of MoMA PS1 simultaneously creating an urban beach of sand, water, and vibrant colours."

YAP also now runs at other galleries around the world. Memorable editions include a field of mushroom-shaped inflatables at Korea's National Museum of Modern and Contemporary Art, and a steel-framed pavilion at Constructo in Santiago, Chile.