Danish practice PLH Arkitekter has based its design for this visitor centre at a Viking landmark in Denmark on a circular shield (+ slideshow).

The Copenhagen practice won the competition to design the visitor centre at the site of a Viking ring-fortress with its proposal called The Lost Shield.

The historic site in Slagelse, south-west of Copenhagen, is referenced in the building's disk-shaped form.

Its green roof will angle up from the ground, and help it to mirror the fortress and blend with its rural setting. The shape also pays homage to the circular shields typically used by Vikings in battle.

"We have designed and placed the building as a lost shield casually left on the edge of the forest," said PLH partner Søren Mølbak.

"The visitor centre's design was inspired by Denmark's only preserved Viking shield, which was discovered at Trelleborg," he added. "The visitor centre lies sensitively placed in the landscape and, like a giant shield, skews upwards to offer fantastic views of its surroundings."

A path carved through the tilted roof will allow visitors a vantage point over the looping earth structure.

The facade will be covered with tarred timber and sails replicating those that would have been used on Viking long boats. 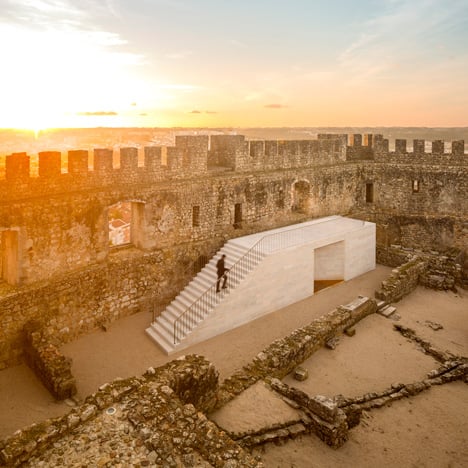 "We've worked hard to bring the site to centre-stage; we've focused on the compelling nature of the place, with its story central to the architecture," said the architects.

Inside, circular exhibition spaces will host displays with an audio-visual focus that follow the narrative of a Viking family.

"We have recreated the Viking atmosphere with a gripping audio-visual universe of exhibition spaces, the crackling of the fireplace in the cafe, the tarred timber exterior cladding and the Viking sails decorating the facades," explained Søren.

"From the moment the visitor approaches the building, it is to be sensuous experience where the boundary between exhibition and architecture, past and present becomes unclear."

The 2,000-square-metre building will host include a cafe, lobby, lecture hall, offices, meeting rooms and a workshop alongside its exhibition areas.