Architect Gabriel Calatrava, son of Santiago Calatrava, has designed a rope installation for a performance of Johann Sebastian Bach's chamber music for the 92Y cultural center in New York (+ slideshow).

The younger Calatrava's installation consisted of a series of flexible ropes stretched across the stage and attached to rotating wheels at either end.

Dancers activated the set design by pulling, gathering, and climbing on the ropes, causing the side wheels to turn and creating a changing composition behind the musicians.

Choreographer John-Mario Sevilla created the movements for the dancers.

The Bretano String Quartet played Bach's The Art of the Fugue, thought to have been composed in the 1740s by the German Baroque composer.

"As someone involved in architecture and engineering I found this project to be extremely interesting because Bach is such a technical composer," said Gabriel Calatrava. "He's very precise and layered with a huge amount of different complexities." 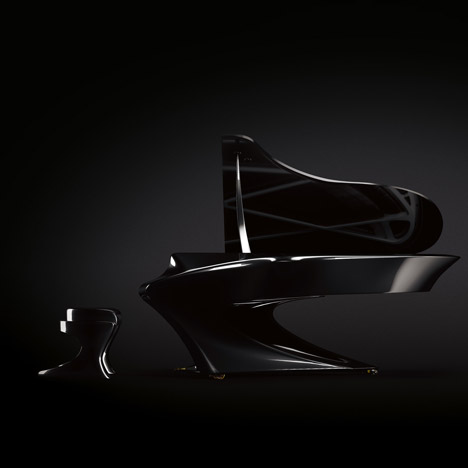 Calatrava said that he wanted to use motion to tie the installation to the performance.

"It had to unfold itself through time, just like music does," Calatrava explained.

The set design is a part of the Seeing Music series at the 92Y, an arts centre located on the Upper East Side of Manhattan.

Gabriel Calatrava studied at Columbia University in New York and worked for his father, Spanish architect Santiago Calatrava, before setting up his own firm under the working name GAC2109 – a reference to his student ID number.

His recent projects include the exhibition design for a show of Alexander Calder sculptures at the Dominique Levy gallery on the Upper East Side, and he is currently designing a private home in the Hamptons.

Gabriel Calatrava explains the design of his Art of Fugue installation