Hall McKnight, which has offices in Belfast and London, designed Victoria Road house for a site that was formerly part of the garden of a larger property.

Suitable sites for new builds are scarce in this area of Holywood, so the architects were faced with the challenge of designing a building that spans a deeply cut stream.

"Whilst not wide enough to present a significant structural challenge, the stream meant it was nonetheless a difficult house to construct, particularly in terms of site access," architect Alastair Hall told Dezeen.

The design responds directly to the natural topography and character of the site, with the building's low height ensuring it remains mostly hidden from the nearby road.

Living spaces are accommodated in a single-storey structure that spans the stream, while four bedrooms and a guest room are contained in a lower block that supports one side of the bridging element.

The upper storey extends from the top of the northern bank, where the stream is contained by a stone wall, across to the more gently sloping southern bank. 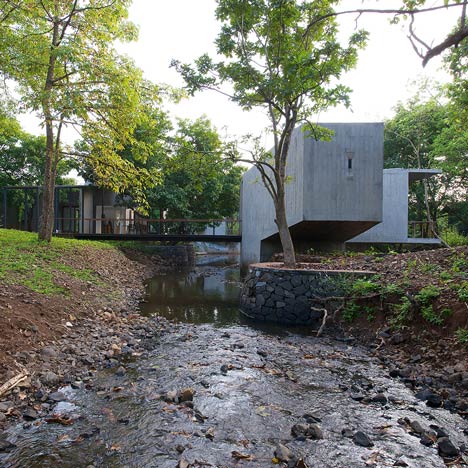 Concrete house by Architecture Brio that straddles a stream in India

The bedroom block sits alongside the stream, with a staircase at the far end ascending to a terrace that extends the full length of the upper storey.

Regularly spaced windows are incorporated into the facade overlooking the main garden. They are separated by rendered and painted cladding, which gives this elevation the appearance of a colonnade.

The opposite facade contains fewer openings to ensure the internal spaces are not overlooked by the neighbouring properties on this side.

An existing footbridge parallel to the house was retained and re-clad in wood. The narrowness of the recessed windows along the adjacent facade also restricts views into the building for anyone approaching along the bridge.

Inside the bridging structure, a sunken lounge area with a built-in fireplace is connected to a dining room, kitchen and another lounge with its own stove at the opposite end. These spaces can be separated using built-in partitions if required.

"The upper level, whilst generally functioning in an open-plan way, can close down into distinct spaces through the use of sliding and hinged doors," Hall added.

Terrazzo tiles featuring an aggregate of black marble chippings provide flooring throughout the living areas, offering a bold contrast to the white-painted walls and ceilings.

Hall McKnight is currently on the shortlist for the £10 million renovation and extension of a college at the University of Oxford and previously designed a pavilion housing a collection of bricks for the London Festival of Architecture 2015.

Photography is by Ros Kavanagh.