Portuguese architect Eduardo Souto de Moura reconstructed a 19th century townhouse to create this Porto guesthouse, which is arranged around a pair of secluded courtyards (+ slideshow).

The 2011 Pritzker Prize laureate overhauled a property in Foz do Douro, the city's former fishing district, to create the simple retreat incorporating both traditional and contemporary styles of architecture.

Completed in 2005, the property was originally named Four Rooms in reference to the number of bedrooms, although it has since been split up, leaving just three bedrooms in the main building. 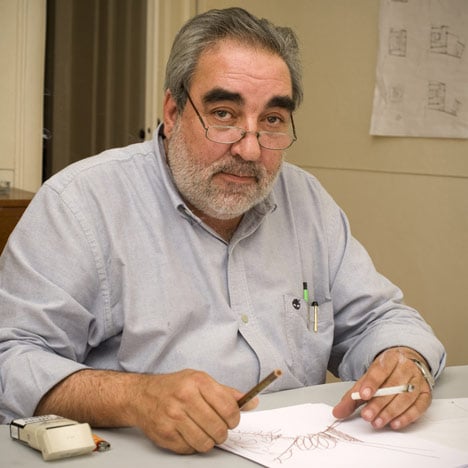 It is now being let for holiday stays through The Modern House – a design-focused estate agency based in London.

The first is a two-storey structure built using thermally insulated concrete, while the second is a single-storey glazed block.

The two blocks are united by the two small courtyards.

Surrounded by tall vine-covered walls, these two spaces offer guests the opportunity to read, dine or work outdoors without being disturbed.

Each double bedroom is accompanied by its own private bathroom.

Two of these suites are located on the top floor of the concrete block. The third occupies the glazed volume, and features its own private entrance and living area.

The fourth bedroom – no longer offered for let – is an apartment in a converted building across the street, now known as the Sky Loft.

The interior features an assortment of natural materials, including stone, marble, granite and wood.

These are complemented by a muted colour palette of white, grey and soft purple.

There are also various furniture pieces by Souto de Moura and fellow Portuguese architect Àlvaro Siza, with whom he regularly collaborates.

Their previous partnership projects include a Venice installation and the 2005 Serpentine Gallery Pavilion.

Souto de Moura is the lesser known architect of the pair, and was awarded the Pritzker Prize 19 years after Siza.

His most celebrated projects include the Casa das Histórias Paula Rego in Cascais.