This weathering steel bridge by Branch Studio Architects spans a quadrangle at a secondary school in Melbourne's western suburbs, forming an art gallery and viewpoint for students en route to class (+ slideshow).

The Melbourne studio was asked to overhaul the pre-existing neglected corridor, converting it into the Flyover Gallery. The structure bridges the 21-metre gap between the science and art departments at the Caroline Chisholm College in the Melbourne suburb of Braybrook.

To encourage students to take pride in the space, the architects wanted to create a new facade. They added two bands of zigzagging perforated Corten steel on either side of a long strip window to form the bridge's new bow-shaped facade.

"It was often only inhabited by the remnants of snack rappers left by students during recess and between classes," they said.

"The school's only request: to make it look 'good', seemed to hugely undermine the vast possibility of such a project," they added. "The Flyover was to be the centrepiece of a large overhaul of an existing quadrangle within the heart of the school campus." 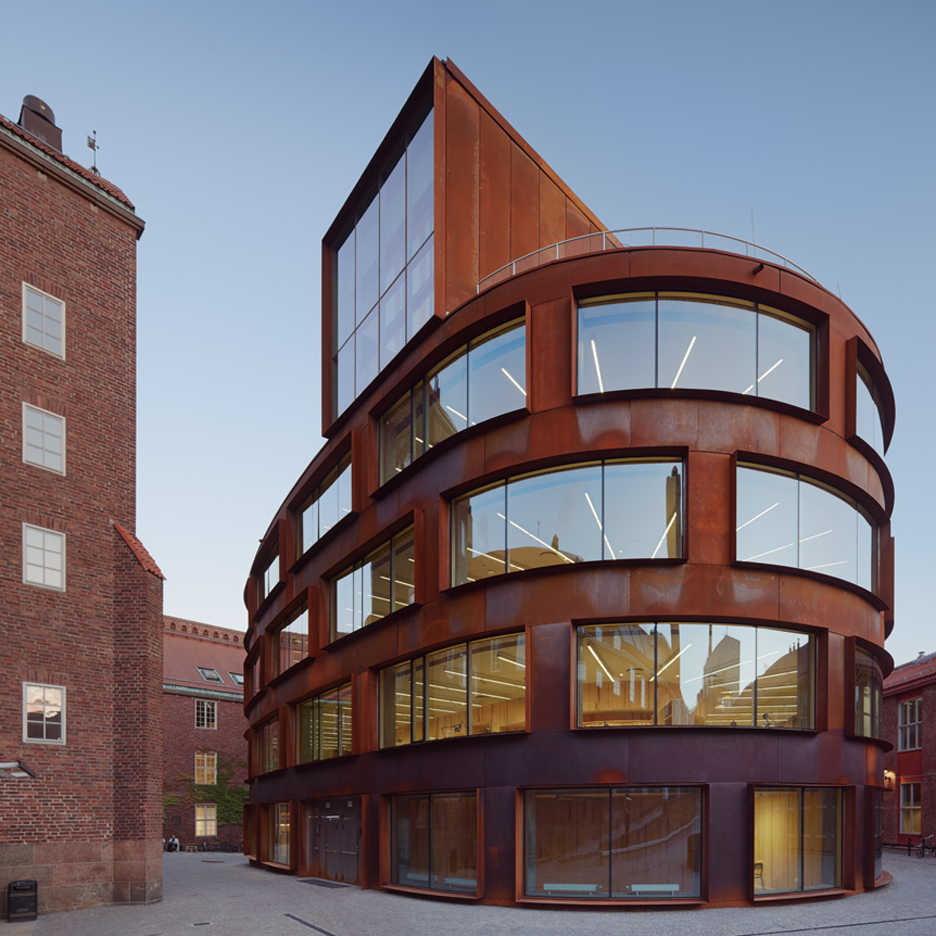 The architects wanted the structure to act as more than a route from A to B. So to encourage students to linger, and to strike up a connection between the science and art departments, they took design pointers from the pedestrian bridges they visited on a recent trip to Europe.

Among their disparate references are the Prince's Balcony on the Doge's Palace in Venice and The Ponte Vecchio in Florence, as well as the geological landscapes in Iceland and indigenous caves in Australia.

"A recent trip to Europe and Iceland, prior to taking on the commission, sparked a series of ideas and conceptual references," they explained. "Conceptually, the space is conceived as a geological cave injected by art."

Student artworks are displayed in five recessed boxes along one side of the courtyard, while a lookout point is aligned with a statue of the school's namesake – the humanitarian Caroline Chisholm.

The speckled pattern created by the Corten cladding and the contrasting black-painted cement board beneath were translated onto the fritted skylight that runs above the artworks.

"The small circular screens on the Bridge of Sighs in Venice sparked the idea for a screened external fabric," explained the architects.

"An abstracted version of the graphical based prints of American artist Christopher Wool provided a balanced, common middle ground between the representation of scientific diagrams and dot art to inform the perforation pattern to the external steel cladding."

On the other side of the corridor there is a continuous strip window overlooking the quadrangle, and a bench that is intended to allow impromptu classes to be taken within the space.

Branch Studio Architects is co-directed by architects ​​​Brad Wray and Nicholas Russo. The studio previously designed a lakeside pump house in rural Victoria, and a timber extension to a Melbourne school.