Milan 2016: Japanese architect Sou Fujimoto has designed this year's Milan design week installation for fashion brand COS, which will feature cones of light created by spotlights.

For the brand's fifth installation in Milan, Fujimoto will take over Cinema Arti, an old theatre in the centre of the city.

His idea is to illuminate the space with spotlights suspended from the high ceiling, creating areas of overlapping beams and shadows as an homage to the building's former use.

"In this installation for COS, I envisage to make a forest of light," said Fujimoto. "A forest which consists of countless light cones made from spotlights above."

"These lights pulsate and constantly undergo transience of state and flow," he continued. "People meander through this forest, as if lured by the charm of the light. Light and people interact with one another, its existence defining the transition of the other."

Items of furniture placed under the lights will offer visitors places to stop and sit. 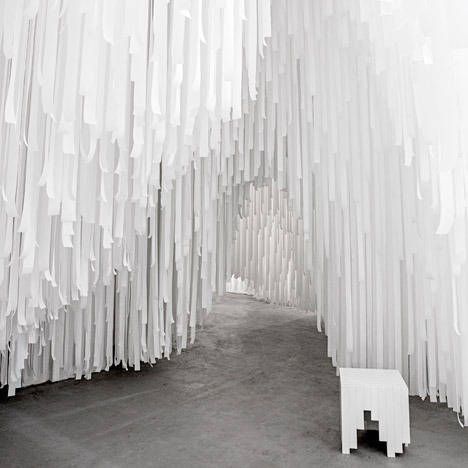 Snarkitecture creates warren of textile ribbons for COS

"The spotlight becomes an interface which connects fashion, space and forest as a form of architecture," Fujimoto added.

Fujimoto established his architecture studio in 2000 after graduating from Tokyo University. His best-known projects include the Final Wooden House made from chunky timber beams and the Tokyo Apartment that comprises four house-shaped apartments stacked on top of each other.

The brand's team was impressed by his 2013 Serpentine Gallery Pavilion – a cloud-like gridded structure that hosted the COS-sponsored Park Nights talks programme – so commissioned him for this installation.

"We are very privileged to be working with Sou Fujimoto, an architect whom as a brand we have such a connection to," said COS head of womenswear Karin Gustafsson.

Managing director Marie Honda told Dezeen that "design and architecture had been a key influence" for COS during an interview in 2014.

The COS x Sou Fujimoto installation will be open from 12 to 17 April 2016 at Via Pietro Mascagni 8 during the annual Milan design week, which runs at the same time as the Salone del Mobile furniture fair.

For previous year's projects, COS worked with designers including Snarkitecture and Nendo to create equally immersive environments.

Nendo's 2014 design focussed on framing the white shirt with a series of brushed-steel elements, while Snarkitecture used over 100,000 metres of translucent fabric to create a tunnel-like warren for 2015.