Oslo studio Reiulf Ramstad Arkitekter has completed a pine-clad cultural museum in western Norway, featuring a spiky roofline designed to help break up the scale of the building (+ slideshow).

The Norwegian firm envisioned the Romsdal Folk Museum as not only a cultural institution but also an "architectonic attraction" for the town of Molde.

The 3,500-square-metre building will be used to host concerts, workshops and lectures, alongside its exhibits about Norwegian culture.

The structure is constructed primarily of pine wood, with the external walls and roof made from planks of the oil-treated timber and supported only where necessary by steel beams.

The roof is fragmented into a series of zigzags, intended to reference the town's existing pitched-roof architecture.

The structure culminates in a tall asymmetric spire, not dissimilar to the form chosen by the firm for a church further along Norway's western coast. 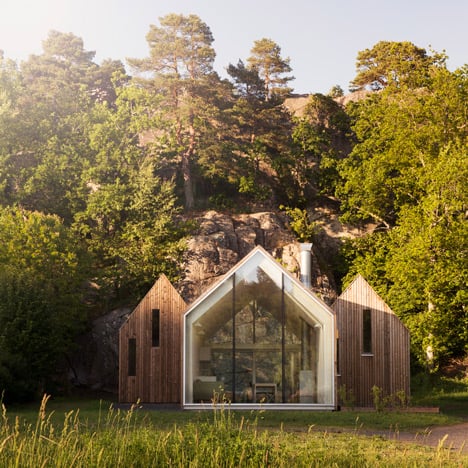 "Our intention in this project was to let the structure signal its meaning and function through an architectural expression and the use of local materials," explained Reiulf Ramstad Arkitekter. "The scale of the building refers to the urbanity and morphology of the town."

"The architectural form brings together the region's folk culture and the area's characteristic landscape qualities in a larger composition."

Rather than adhering to a traditional all-white aesthetic for the galleries, the studio created "black boxes" that are intended to give curators control over the artificial lighting of these areas.

Galleries, an auditorium and library are placed at ground level, and these public areas are separated from the administration wing that occupies a portion of both the lower and upper floors.

The museum's archives and workshops are located in the basement, and transported to and from the upper floors via a large goods lift.

Large sliding doors separate the permanent and temporary exhibits, giving the option to combine or separate the collections.

"The plan geometry is deceptively simple, the characteristic angled shapes are limited to the roof and the external wall, making the circulation and internal organisation clear and flexible," said the architects.

The building is naturally lit by a combination of vertical strip windows and recessed glazing, some of which have been silk-printed with colours and patterns.

Reiulf Ramstad Arkitekter initially won a competition to design the Romsdal Folk Museum in 2007 and completed construction in 2016.

It joins a cultural centre designed by Danish architects 3XN for the town in 2012, which has stone bleachers on its roof that allow visitors to take in outdoor concerts.

Photography is courtesy of Erik Hattrem and Reiulf Ramstad Arkitekter.