A pair of conference rooms are housed within a sculptural glass and plywood volume at the centre of this Los Angeles office, created by California studio Domaen in a converted warehouse (+ slideshow).

"From the beginning, an emphasis was put on creating an interior for multiple uses and purposes, since as a content and production provider, the client requested a highly flexible space that allows staging scenarios and different team configurations for their client base," the designers said.

"At the same time it was suggested to establish a contemporary architectural leitmotif that would distinguish the studio from common open-plan warehouse offices," they added.

Visitors enter into a lobby and lounge area, where a bench extends from the volume containing one of the conference rooms. 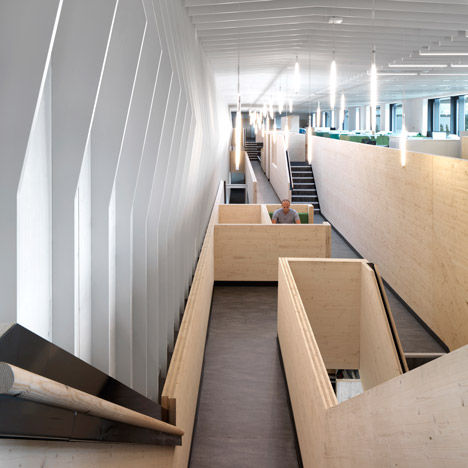 Past the enclosed meeting area is an open production zone, followed by the second conference room.

Plaster and plywood fold up to the ceiling, framing passageways on either side of the object.

A series of glazed offices are located along on wall, while other spaces include a staging area, production and post-production suites, and an editing suite.

Beyond the meeting rooms and private offices, an open studio area allows the agency to shoot photography and video. The space opens to an outdoor terrace.

Photography is by Paul Vu