London studio Liddicoat & Goldhill has remodelled a derelict barn in Kent, England, to create a home featuring mechanically operated doors and a staircase that wraps around a chimney (+ movie).

Named Ancient Party Barn, the house comprises a cluster of 18th-century buildings that once functioned as a threshing barn, dairy and stables for a farm in rural Folkestone.

Architects David Liddicoat and Sophie Goldhill were tasked with transforming the buildings into a home for a couple who are avid collectors of architectural artefacts, and who were looking for a retreat from the city.

"Rather than demand specific spaces or programmes, their brief focused on materiality and atmosphere, and on creative re-use of the existing volumes," explained Liddicoat.

"Our task was to combine the quality of the surviving barn fragments with the texture and tone of their found materials," he said. 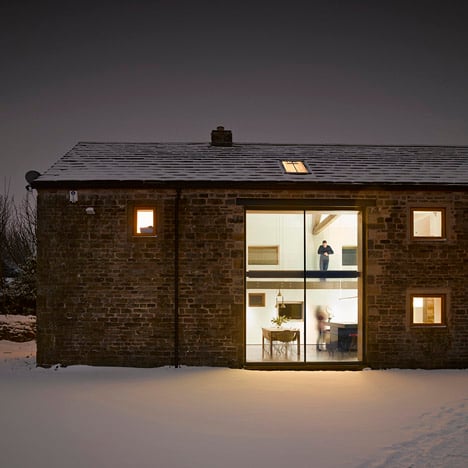 The structures were in a fairly dilapidated condition, so their original green oak frames has to be dismantled and repaired offsite.

In one of the smaller blocks it was simply reinstalled, but in the main barn some elements had to be replaced with steel beams – although these are disguised behind structurally insulated panels, all fronted by wood.

One of the biggest interventions was the addition of numerous mechanically operated openings, allowing the building to be either securely closed off, or opened up to take advantage of countryside views.

These include large shutters intended to evoke the original barn doors, which front an open space at the centre of the barn.

One the other side of this space is another set of doors, concealing a large rotating window operated by an adapted chain lift. Elsewhere, the architects have added an "aircraft-hangar door" that concertinas upwards to create a canopy for a terrace.

"To maintain the barn's brooding presence – and to provide security and a sense of protection from rolling Channel mists – the barn is usually kept in a closed state," said Liddicoat.

"However, industrial-scale kinetic mechanisms create openings that address key views into the countryside," he added.

The dining space and kitchen are both housed on one side of the barn. This lofty space features a mix of traditional furniture elements and bespoke plywood fittings.

The main living room is on the opposite side. Here, a tapered brick chimney integrates both a fireplace and a steel staircase, which leads up to a newly created mezzanine bedroom and bathroom above.

"The materials were chosen for their tactility – we love the inviting warmth of the brick and metal, and the way the light changes their character through the day," Liddicoat told Dezeen

Additional bedrooms are located in the buildings to the rear of the site, along with a guest kitchen and living space.

Low-energy lighting has been added throughout the property, as well as a digital heat, light and security system that allow the building to be controlled remotely. This suits the clients, as one of them is a frequent traveller.

Liddicoat & Goldhill has a studio in Dalston, east London. The partners previously designed their own black-brick home in London, while other projects include a garden cabin and a house extension with an oak-screened staircase.

Photography is by Keith Collie, unless otherwise stated.