Geneva Motor Show 2016: French manufacturer Bugatti has unveiled a £1.9 million vehicle, which it describes as the world's most powerful and fastest car, at the 86th Geneva Motor Show.

Bugatti's eagerly anticipated successor to its Veyron model – the world's previous fastest road vehicle – is so quick that the French manufacturer limited the new car's maximum speed to just 260 miles per hour for road use. Testing to obtain the Chiron's top speed is due to commence soon.

"It is part of human nature to cross boundaries and set new records – to run 100 metres faster than ever before, to fly even further into space and to enter new realms," said Bugatti's chief Wolfgang Dürheimer. "The Chiron is the result of our efforts to make the best even better."

The term hypercar is given the top one per cent of high-performance supercars – usually the fastest and most-expensive.

Lightweight materials such as titanium and carbon fibre were used to reduce the engine's overall weight, while better-performing turbochargers – units that force extra air into the combustion chamber, therefore increasing the engine's efficiency – were fitted.

To keep the redesigned engine operating within the optimum temperature range, Bugatti also improved the Veyron's air cooling system. As a result, more than 60,000 litres of air per minute are pumped through the engine.

The Chiron's monocoque – or protective structural shell – and its entire rear section are made from carbon fibre, further reducing overall weight in comparison to its predecessor.

"If all the fibres used in the monocoque were laid out end to end, they would stretch nine times the distance between the earth and the moon," explained a statement released by Bugatti yesterday.

Carbon fibre is also used for the new vehicle's outer skin and LED headlamps have been incorporated into the front end, which are the "flattest projector headlamps ever fitted to a car", according to Bugatti.

A body part that extends from the A-pillar – vertical supports holding either side of the windshields in place – sweeps across to the rear, giving the vehicle its distinctive open oval and two-tone profile. A stretched brake light and titanium exhaust dominates the newly designed rear.

"In view of our extraordinary brand and the task in hand, it would not be adequate to simply draw a few fashionable lines," said Achim Anscheidt, director of design at Bugatti.

"In terms of design, the Chiron was an opportunity to develop most of the basic elements required for an unambiguous stylistic concept from the extreme technical requirements of the vehicle with a view to underlining the performance of this unique super sports car."

"This principle of form following performance defines the Chiron as an authentic technical product and a fascinating automobile sculpture," continued Anscheidt. "Both for our customers and for us as designers, it is important for a Bugatti to have a certain stylistic longevity so that it is still perceived as precious in 10 or even 50 years."

The interior has been designed to reflect the vehicle's exterior form, which can be clearly seen in the C-shaped separating line between the driver and passenger.

"The C-shaped light strip emerges from the front bonnet into the passenger compartment as a raised graphic element and merges seamlessly into the dashboard," explained Anscheidt. "From here, it flows over the armrest between the seats to the back wall where it rises to the roof liner; at the front, it ends at the rear-view mirror." 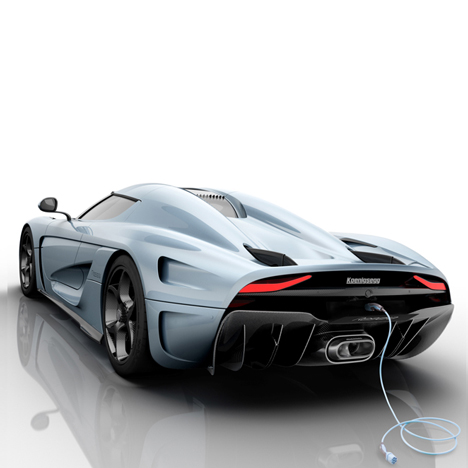 To improve driver comfort at lower speeds while offering maximum performance at high speed, Bugatti developed an adaptive chassis for the first time in its vehicles.

This means that drivers can choose between driving modes, such as Autobahn, Handling and Top Speed. When these are selected, the vehicle adapts its settings accordingly. To enable Top Speed mode, a separate key is required. This so-called Speed Key ensures the driver consciously opts for this mode.

Slowing such a fast-moving object down isn't easy, so Bugatti also set about developing Formula One-style racing brakes for the Chiron made from carbon silicon carbide.

"This material makes the brake disk lighter at the same time as giving it greater improved corrosion resistance, performance and durability," explained Bugatti. "In addition, the front and rear brake discs of the Chiron have a larger diameter, resulting in more effective heat dissipation by the brake discs and improved performance on the track."

As well as using the air flowing over the vehicle to keep all four wheels to the ground, the Chiron's adaptive rear spoiler also acts as an air brake.

When the driver hits the brake pedal at high speed, the rear spoiler flips to an upright position. Air hits the spoiler's surface and the resulting wind resistance further slows the vehicle.

Bugatti currently offers 31 different colours of leather to customers. As standard, the vehicle comes equipped with with dimmable lighting and a cooled glove compartment.

All-electric and hybrid supercars stole the headlines at last year's Geneva Motor Show, with McLaren, Koenigsegg and Aston Martin all showcasing vehicles equipped with the technology.

Architecture firm Foster + Partners and auto brand Nissan revealed a vision for self-charging driverless cars that could power the home at this year's event in Switzerland.