Japanese studios Hibino Sekkei and Youji no Shiro have returned to a kindergarten building in Kanagawa Prefecture they designed 42 years ago, updating it to suit modern teaching styles (+ movie).

Located on a site in a residential area of Atsugi city, the Atsugi Nozomi (AN) Kindergarten needed updating to comply with current earthquake safety regulations as well as adapting for newer teaching methods.

Rather than completely demolish the existing building, the architects chose to preserve elements of their previous design in the new two-storey structure.

"We were requested to change the kindergarten to the type for the next generation that is appropriate for the current days, and accepted to design it again," said the architects. 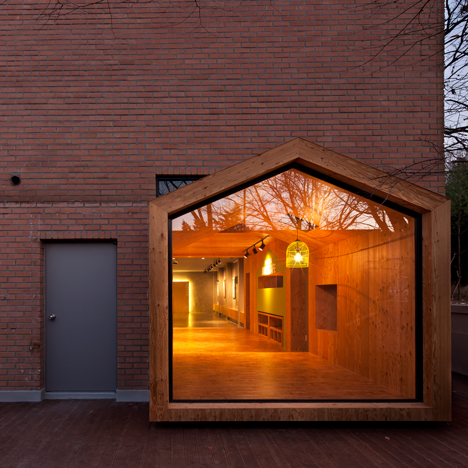 Teaching spaces and a gym are arranged on either side of this wide walkway that runs along the length of the structure, with a staircase in the middle providing access to the upper floor.

A house-shaped hole set into the supporting structure for the stairs provides a hiding place, while freestanding hut-like structures provide reading and play spaces.

Similarly shaped boxes with built-in seating are set into the glass balustrades around sky wells on the second floor, which features clerestory windows on each side of the tall corridor space that rises above the building's roof.

"There is a small window in the hut, and it produces a new connection with children who are playing downstairs," said the architects.

"The hut under the stairs looks like a hole in large tree, and a soft cushion is spread across the whole space."

The glass balustrades on the upper floor are designed to allow the children and teachers to see through the building.

"To improve the fact that they cannot see each other, since the one-floor building was transformed to two-floor building, we set a number of open ceiling spaces," said the architects.

"In addition, for the purpose of reducing lighting and use of air conditioning during the day in Japan – where energy-saving buildings have been a theme since the Great Eastern Japan Earthquake – we set a large opening in the common area to have a high sidelight where the sufficient sun hits indirectly and to cause the air to flow," they added.

The huts and house-shaped nooks are part of a wider strategy to encourage exploration and play inside the building's central communal space.

The architects said they imagined this space as being like a woodland with "tree houses", huts and a climbing wall.

"In the woods, there are small and large spaces, small steps, spaces where they draw a picture, climbing spaces and a hut similar to a tree house," they said.

"In recent years, when children's physical ability and creativity have been decreased, we expect that they can start improving their ability by setting a variety of playgrounds indoors at different places."

Offices occupy a single-storey space at one end of the ground floor next to the entrance area, which opens out to a tarmac car park and play space.

The indoor spaces are set back along this side of the building, while the wooden roof structure extends down to the ground, creating a sheltered area fronted by a partial screen.

Youji no Shiro specialises in design for children, and is a partner firm with Hibino Sekkei. The two studios have collaborated on a number of education projects, including the DS Nursery in Ibaraki Prefecture, which features blackboard walls and a courtyard garden.

House-shaped additions are becoming increasingly common interior features in Japanese architecture, with other examples including a garden shed inside a kimono designer's workshop, a dental clinic in Kobe with treatment rooms inside a translucent house-shaped enclosure, and a house with four smaller houses inside it.

Photography is by Studio Bauhaus, Kenjiro Yoshimi and Ryuji Inoue.