Japanese architect Toyo Ito has updated the black version of his spherical mesh Mayuhana lamp so that the pendant now comes in an even darker shade.

Produced by Japanese brand Yamagiwa, the Mayuhana lamp was first launched in 2007 and features a triple skin of delicate fibre mesh balls.

The design has been reproduced as Mayuhana Ma Black – an edition that is coloured darker than its predecessor.

"Ma" refers to a Japanese character that means true or genuine, while the new colour is based on traditional sumi calligraphy ink.

However, Ito would have been unable to use the "blackest black" ever created, as artist Anish Kapoor has been given exclusive rights to the pigment.

"Mayuhana Ma Black is light in darkness," said Ito. "It is the quintessential quality of light found in Japan that reminds me of In Praise of Shadows by Junichiro Tanizaki."

The architect refers to Tanizaki's 1933 essay on Japanese aesthetics, which has influenced countless design projects – from a fashion collection by Jin Kay to lights by Issey Miyake. 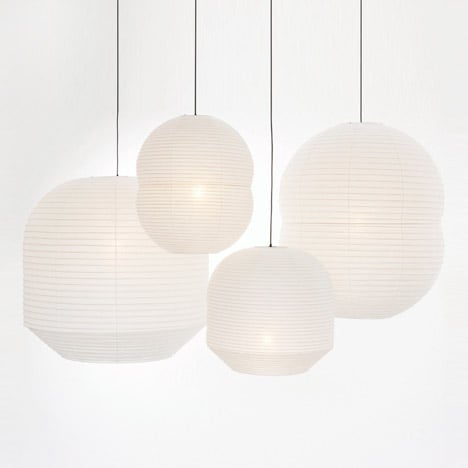 Ito is one of Japan's most revered architects, and received the prestigious Pritzker Prize in 2013.

His most famous projects include the Tama Art University Library, the TOD's Omotesando Building and the Za Koenji Public Theatre – all in his home city of Tokyo.

Among other product designs by the architect is a set of cutlery with slim handles like chopsticks for Alessi.

The Mayuhana Ma lamp will be available in Japan from spring 2016, and is already on pre-sale for international markets.

Yamagiwa also produces a wooden table lamp designed by Frank Lloyd Wright for his 1911 Taliesin house in Wisconsin, and an LED pendant lamp by Ross Lovegrove.