Melbourne architecture office Taylor Knights has renovated an existing Federation-style house in the city and added a contrasting contemporary extension that opens directly onto the rear garden (+ movie).

Taylor Knights was asked to refurbish the semi-detached property in the Australian city's St Kilda East district to enable two generations of a family to cohabit and have their own spaces.

The solution involved dividing the house so the existing portion of the building facing the street can be separated from new areas at the rear by closing a sliding door across the communal corridor.

"In response to the soaring Australian housing market, the design objective of St Kilda East House was to create two individual zones that allowed multiple generations to live together; promoting independence while still allowing interaction under one roof," said the architects in a statement.

Dual access to the site means that both ends of the house have their own entrances. The south-facing elevation incorporates the original front door, while the north-facing back yard has independent street access.

A corridor that stretches along one side of the property extends from the main doorway, past a lounge and a pair of bedrooms before emerging into the extension. Here, a double-height void overlooking the kitchen contains the main circulation.

"The kitchen has been relocated to the heart of the house, forming the union between the two zones," the architects added. "The space is then celebrated by the placement of a large void over the kitchen acting as a lung for the building, delivering fresh air, light and space into the centre of the home."

The kitchen is incorporated into a new two-storey volume that houses an open-plan living and dining area on the ground floor, with the master bedroom and study above. Dark wood joinery gives it a strong presence that draws the eye upwards as it rises into through the void.

Bi-fold glass doors allow the ground floor space to open fully onto a decked terrace, which is sheltered beneath the projecting upper storey. 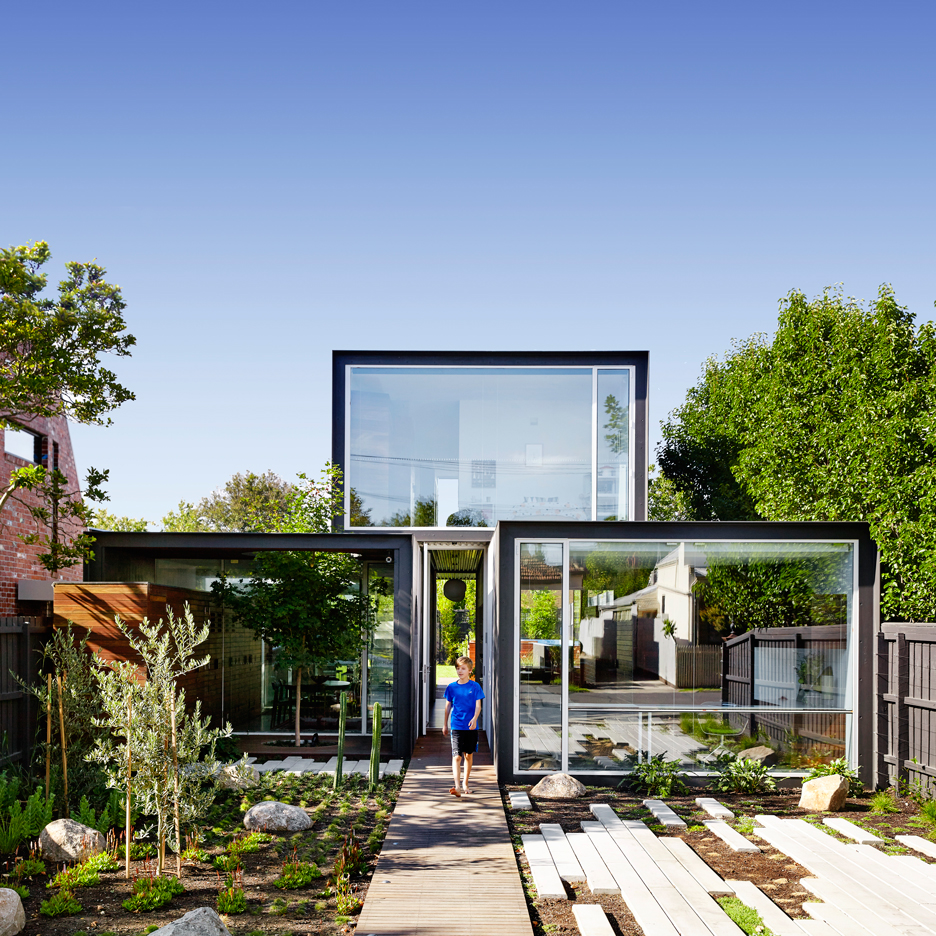 The facade of the cantilevered first floor is clad in an adjustable screen, covering operable windows that enable the climate of the master bedroom suite to be controlled.

Skylights incorporated into the void flood this space with natural light that washes over a curved ceiling above the kitchen. The wall lining the staircase is made from a giant pegboard, which the owners can use to customise this space.

At the top of the stairs, a perforated metal walkway allows light to filter through to the room below. The walkway connects the bedroom area in the new extension with a study inserted into the previously underused roof space.

The street-facing elevation retains the period features that distinguish it as a typical example of Federation architecture – the term used to denote buildings constructed in Australia during the late 19th and early 20th century.

A bay window with a simple steel frame juts out from the facade, adding a modern detail to the traditional exterior and providing a space for reading or relaxing that looks directly onto the street.

Architects in Melbourne are regularly asked to update the city's old housing stock. Other similar projects that have featured on Dezeen include another property in St Kilda East that was extended to create two wings for eating and sleeping either side of a dining space, and a terraced house to which a pair of volumes with pitched roofs and glazed gables were added.

Photography is by Fraser Marsden.