Australian studio Taylor Knights has linked a house in Melbourne to its garden with a modest brick extension, and taken subtle cues for its interiors from the colours in an abstract painting by Wassily Kandinsky.

The single-storey property is located in the city's Brunswick West suburb, and belongs to a creative couple and their child.

They approached local practice Taylor Knights to create an extension that would offer a better visual connection between the existing home and its sizeable back garden, which was being obscured by a "rabbit-warren of compartmentalised rooms".

Wanting the Brunswick West House to act as a calming retreat, the clients also requested that the architects establish private and communal areas where they can relax together as a family or spend time alone.

With this in mind the architects decided to erect a rectilinear volume to hold a new open-plan dining and sitting room – bedrooms and bathrooms have been contained to the pre-existing part of the home.

An outdoor path sprawling with ivy has been made into the home's entranceway, which leads to a door that straddles the old and new sections of the property.

"This approach enabled the home to operate succinctly in two halves: the original rooms now accommodate more private activities, while the addition forms its new social heart," explained the practice in a statement.

The extension is fronted by large panels of timber-framed glazing that provide uninterrupted views of the garden and can be pushed open to provide ventilation throughout the summer months. 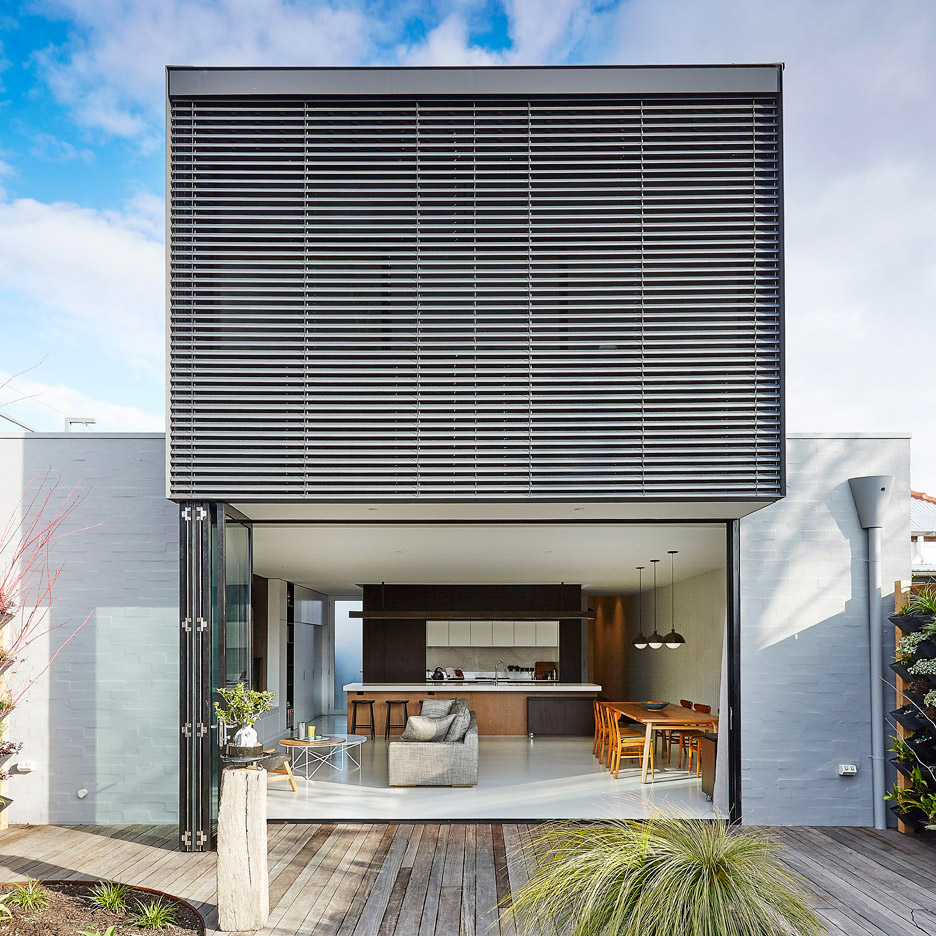 It is structured around three white-brick walls, one of which protrudes into the room to form a cosy window seat where inhabitants can escape to read a book.

When it came to designing the interior, the architects turned to the clients' large collection of classic art prints for inspiration.

"A family favourite [is a] much-loved print of [Wassily] Kandinsky's 'Upward' (1929). This offered an opportunity for us to draw upon some of the artwork's beautiful geometric tonal elements, which in turn formed a reference for the interior palette," they explained.

Floors have been crafted from sage-coloured concrete inset with flecks of deep blue stone, while the ceiling and kitchen cabinetry have been completed in stark black.

The architects have also integrated gridded shelving to accommodate the clients' large collection of literature.

Taylor Knights was established in 2013 and is led by architects Peter Knights and James Taylor. The practice has previously added a modern extension to a traditional Federation-style dwelling in Melbourne's St Kilda East district, enabling two generations of a family to cohabit.