Melbourne studio Clare Cousins Architects rearranged and extended a Victorian house in the city's St Kilda East district to create two wings for living and sleeping, either side of a dining space that opens out to the garden.

St Kilda East House was designed by Clare Cousins Architects for a young family who wanted to update their existing double-fronted property while retaining its original character and details.

Previous lean-to extensions added to the rear of the house had obstructed views of the garden, so the architects removed them and expanded the two main wings to improve sight lines and provide more practical spaces.

"In contrast to contemporary open plan 'box-on-the-back' additions, the project involves a series of insertions woven into the fabric of the original building," said the studio.

"Spatial planning was driven by the cellular logic of the Victorian house, creating a series of intimate and interconnected spaces."

The two wings of the existing plan were extended along either side of a central void that allows natural light to penetrate deep into the centre of the home. 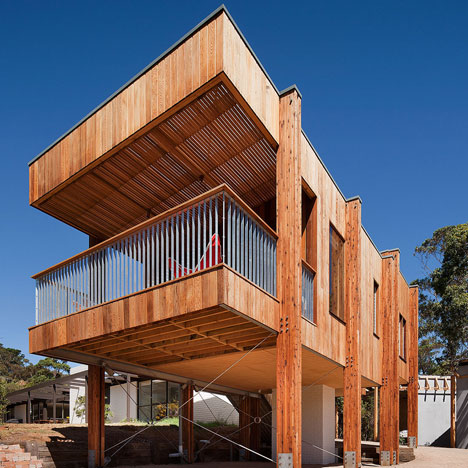 In the new arrangement, the wings have been dedicated as sleeping and living zones, with the space between transformed into a covered courtyard housing the main dining room. This room features full-height glass doors that pivot to open the space to the outside.

Herringbone flooring continues out form the dining room into the garden, helping to create a smooth transition between the indoor and outdoor spaces.

The original brickwork of the walls surrounding the dining area was exposed by stripping back the existing paint, while skylights in the new ceiling permit views of the original eaves.

Recycled red and white-painted bricks from the demolished lean-tos were used to clad the extensions and to complement retained red brick surfaces, such as those forming the dining room walls.

Floor-to-ceiling glazing incorporated into the inward-facing wall of the living area allows the parents to look across the void between the two wings so they can keep an eye on their daughter's bedroom and playroom on the opposite side.

A glazed box projects from the rear wall of the living room, creating a window seat looking out towards the garden.

Inverting the slope of the existing hipped roof resulted in this wall ascending to a height of 4.5 metres, with porthole-like windows inserted into its surface allowing morning light to reach the kitchen.

A gap between an existing external brick wall and the site's boundary has been converted into a narrow dressing room containing fitted cabinets and culminating in a glazed wall and skylight that fill the space with daylight.

Patterned floor tiles connecting this space with an adjacent en suite bathroom were chosen to reference the original tiles found outside the house's entrance.

Read on for a project description from the architect:

Located in St Kilda East, this double fronted Victorian house offered ample space for a young family; however, brick lean-tos at the rear prevented an outlook to the generous back yard.

In contrast to contemporary open plan 'box-on-the-back' additions, the project involves a series of insertions woven into the fabric of the original building. The majority of the house was retained and restored and the extent of the new works minimised. Spatial planning was driven by the cellular logic of the Victorian house, creating a series of intimate and interconnected spaces. Carefully considered sightlines open up strong visual connections through the house and to the garden.

Two wings, established in the original plan, are organised into living and sleeping zones. The threshold space in-between forms a dining room and courtyard, both with a herringbone paved floor, inviting the outdoors into the centre of the house. Introducing northern light deep into the plan, the courtyard permits deliberate visibility between living zones and the sleeping wing, particularly to the play area and bedroom of the client's only child.

The footprint of the new living space occupies that of the original red brick lean-to. Reversing the pitch of the original roof, the new volume soars to a 4.5m high volume punctuated by glass apertures which cast awakening morning light to the kitchen. Surrounded by garden, the house now acknowledges its environment, in particular the living room window seat which draws both the interior and occupant out into the garden.

The walk in robe and shower is 'shoe-horned' into a sliver of land between polychromatic brickwork and a boundary brick wall. Windows and a glazed ceiling immerse the occupants with the outdoors and inject light into the adjacent ensuite, while patterned tiled floors in these spaces reference the tessellated tiles at the Victorian entry.