London company Primo Toys has designed a "hands on" wooden play set that aims to teach three-year-old children the principles of coding without the use of screens (+ slideshow).

Cubetto, which launched a Kickstarter campaign this week, aims to introduce programming to toddlers and preschool children by simplifying the core concepts of coding.

The play set includes a simple wooden cube-shaped robot named Cubetto, a floor mat with a map printed on it, a programming board and a variety of colourful instruction blocks.

The aim is to direct Cubetto to his home on the mat using the programming board and instruction blocks.

Each block is coloured to represent a different chunk of code, and these combine to generate a string of commands. Red is to move forward, blue to turn left, yellow to turn right, and green acts as the function key.

The system uses open-source electronics platform Arduino, which translates the directions entered into the programming board into movements for Cubetto.

Shapes engraved into the top of each instruction block are designed to also make the kit suitable for visually-impaired children.

"With the Cubetto Playset, we wanted to create an new, tangible programming language that any child, of any language, anywhere in the world could pick up and begin using straight away," said the design team. 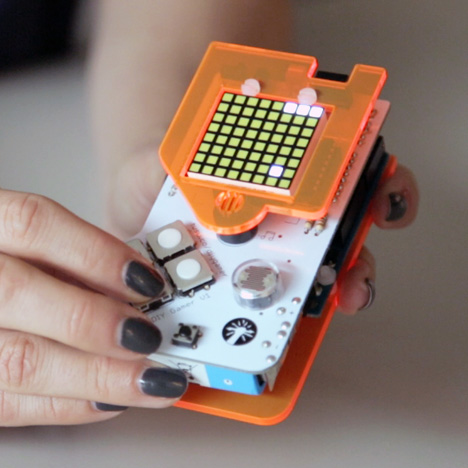 "The specific shapes on each block and a two-toned recognition pattern sound means that visually-impaired children do not need to see Cubetto to move it," they added. "Ultimately they can touch and feel Cubetto as he moves through the map."

Its design is intended to be both cross-cultural and gender neutral, to encourage both girls and boys aged three to five to learn programming principles.

The bright colours used on the components were chosen to be reminiscent of other toys found in childrens' toy boxes. Wood was used to allow the toy to "collect history" through signs of usage.

"This minimalist design encourages children to use their imagination to give Cubetto its own personality, and build their own unique stories around it," added the team.

Cubetto was inspired by Italian physician and educator Maria Montessori's early learning methods and MIT's programming language LOGO, which was designed by Seymour Papert in the 1960s as a way to teach children the basic principles of coding.

Cubetto co-founders Matteo Loglio and Filippo Yacob believe that teaching children the principals of coding is now as important as reading and writing.

"Programming is a new literacy, and should therefore be prioritised from an early age," said the team. "We think that children should be introduced to programming when they start learning how to read and write."

"It is important that children this young are exposed to basic principles of programming, even if they don't necessarily learn how to code," they added. "Being introduced to the environment of programming, and the language of algorithms, debugging and functions, helps give them the foundations necessary to succeed in today's digital age."

London company Technology Will Save Us, which designed a DIY games console for children, shares a similar view.

In an interview with Dezeen, co-founders Bethany Koby and Daniel Hirschmann said that teaching children computer code will have profound consequences.

"In the UK the curriculum has just changed to put programming very much at the core of what all schools have to teach," said Hirschmann. "You'll end up having a really inspiring group of young people who are totally going to change the world. That's what I'm excited about."

Cubetto is currently available to pre-order via crowdfunding website Kickstarter. Deliveries are expected to be made in May 2016.