DesignMarch 2016: a group of Nordic designers have created a range of homeware using a concept borrowed from the pen-and-paper game Picture Consequences (+ movie).

The designs are produced by 1+1+1, a collective of Nordic design studios that includes Hugdetta from Iceland, Petra Lilja from Sweden and Aalto+Aalto from Finland, who first met during Stockholm Design Week in 2013.

"We did lots of thinking about how we could make design together even though we're in different countries," Róshildur Jónsdóttir of Hugdetta told Dezeen. "So we thought why don't we do a project like the game with folding paper where you draw a head then then fold the paper and see a neck, then the next person draws."

The designers came up with a concept where they each designed an object with three distinct parts that can be mixed up to create a variety of combinations. 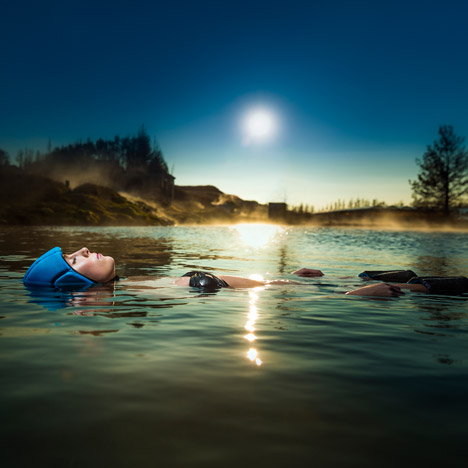 "We just design one object with three parts so there are 27 possibilities," said Elina Aalto of Aalto+Aalto. "So with the candle holders, we created nine versions of one design to create a full range of 27 candle holders."

For each object the designers agreed a set of rules before the design process began, but did not share information about materials or details during the process.

The most recent objects created by 1+1+1 were a series of candle holders for last week's DesignMarch festival in Reykjavik. Earlier this year they also launched a range of mirrors at Stockholm Design Week.

"With the mirrors we had a rule about meeting points," Jónsdóttir told Dezeen. "So we had 35 centimetres where they essentially kiss. Then there were some limitations to size and depth of each one."

"With the candle holders it was similar: just how they met, and we had a maximum and minimum height of each part," Lilja added.

1+1+1's first design using the three-part method was a collection of floor lamps, which are made from materials ranging from coconut-tree fibre to plastic. They have also designed a series of cabinets, which the designers said coincidently ended up being entirely made from ash.

"We're all quite experienced and we've done lots of shows but this is the most fun thing we've done, it is a very nice, organic way of working," said Jónsdóttir. "The first two projects were total experimentation but now we know the rules, we really want to take it further."

The pieces by 1+1+1 were on show at Spark Design Space gallery in Reykjavik as part of this year's DesignMarch, which took place from 10 to 13 March 2016.