BIG has now released a full set of images of its design for the new Washington Redskins American football stadium, revealing more activities that the venue could facilitate (+ slideshow).

Bjarke Ingels' firm envisions the building being set within a large amphitheatre-like park that could transform into a performance venue for up to 100,000 people.

Four full-sized training fields would be created within the park, as well as a moat that can be used as a wave pool for surfers, a river for kayakers, and an ice rink in winter.

"The new Washington Stadium will be a lively destination both inside and outside all year and all week," said Ingels, who is also designing this year's Serpentine Gallery Pavilion in London.

"We have sought to distill the essence of the game-day experience before, during and after the game, creating a more compact, efficient and intimate stadium as opposed to the colossal facilities of the past," said Ingels.

The 60,000-seat stadium will be wrapped in a golden metal mesh that curves back and forth to highlight the positions of entrances and concessions. 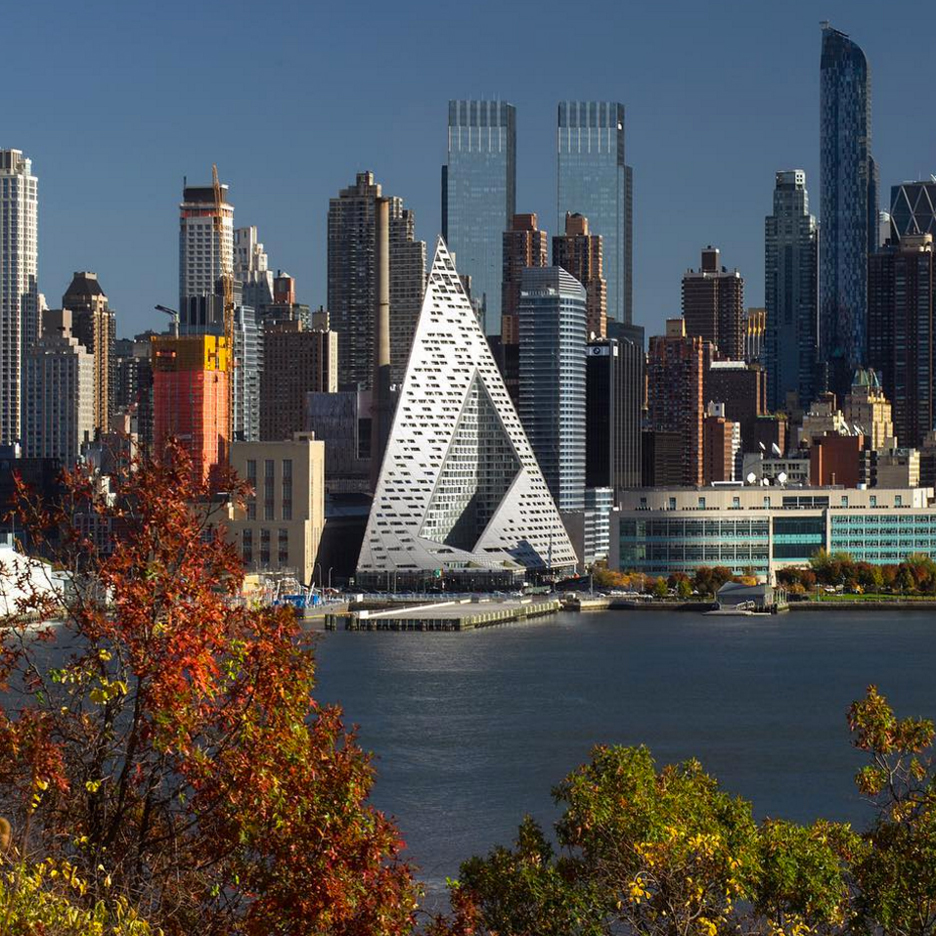 The circular layout will make extra room for bleachers at the 50-yard line, but still give spectators a good view of the action. According to BIG, it has forgone "the traditional, tiered design of most American Football stadiums to create one big bowl where all the fans can see each other and cheer on their respective teams in unison".

"We are incredibly excited to take active part in the evolution of the American football stadium, bringing the more than 60,000 fans closer to the game, the players and each other in an architecture of collective intimacy," added Ingels.

Ingels unveiled the design on US television show 60 Minutes earlier this week, claiming the "very practical" proposal is "designed as much for the tailgating, like the pre-game, as for the game itself".

Parking for 25,000 cars would be set beneath the tiered landscaping, allowing vehicles to drive up close to the stadium, but the moat and bridges will help to slow down the volume of people arriving into the building.

BIG was first linked to the Redskins project in January, fuelled by an earlier post on Ingels' Instagram account showing M&M candies emblazoned with the Redskins' controversial mascot — an Indian chief.

The firm would not confirm the rumours at the time, stating only that it was working on a National Football League stadium for an undisclosed client.

The Redskins currently play at the FedEx Field, an 82,000-seat arena in Maryland designed by HOK Sport in the 1990s.

The new stadium is expected to be built in the Washington DC metro area. No specific location has been announced, although BIG's images suggest the team has a set address in mind.

Copenhagen-based BIG is rapidly expanding its presence in the USA and Canada, having released a series of new designs over the last two years. It ispartnering with Thomas Heatherwick on the new Google headquarters and working on a skyscraper for New York's Hudson Yards.

It also has numerous projects underway, including the Via 57 West tower in New York and the overhaul of the Smithsonian campus in Washington DC.