Kengo Kuma has revealed plans for his first building in Australia, a cylindrical civic centre by Sydney's Darling Harbour that will feature the Japanese architect's characteristic timber cladding (+ movie).

Ribbons of light-coloured wood will wrap the curving building known as The Darling Exchange in an "organic and spontaneous manner" according to Kuma.

Its six curving floorplates will be shifted off centre, and walkways are angled to create a spiralling form – not dissimilar to the design developed by Swiss architects Herzog & de Meuron for a new college at the University of Oxford.

The building will contain a library, childcare centre and market hall as well as a rooftop bar and restaurant with views over Tumbalong Park, the Chinese Gardens and Cockle Bay. It will also host a "makerspace" and Innovation Exchange to support creative and technology start-ups.

"Our aim is to achieve architecture that is as open and tangible as possible to the community, and this is reflected in the circular geometry that creates a building that is accessible and recognisable from multiple directions," said Kengo Kuma.

"The wooden screen wraps the exterior of the building in a dynamic and exciting manner, a historical reference to Darling Harbour originally being a hive of business activity and a focal point as a market exchange."

Gaps between the strips of timber will allow snippets of activity within the building and its external ramping walkways to be seen from a new public plaza below.

This 2,700-square-metre Darling Square has been designed by Australian landscape and urban design firm Aspect Studios.

Both Darling Square and The Darling Exchange are being developed by property company Lendlease as part of the AU$3.4 billion revitalisation of Darling Harbour, overseen by OMA, Hassell and Populous. 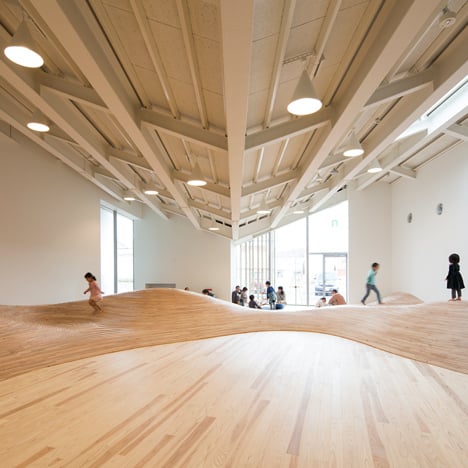 The redevelopment is expected to create housing for 4,200 residents, 2,500 jobs, and attract visitors to the area.

An eight-metre-wide lane will improve pedestrian links between Darling Square and the city's Chinatown.

"Throughout history, civic buildings and public squares have brought the community together," said Lendlease CEO and director Steve McCann.

"Our sincere desire is that The Darling Exchange will become a vibrant heart of the local community and a meeting place for all Sydneysiders and visitors."

Kengo Kuma is known for his innovative use of timber, which gives texture to both the interiors and exteriors of his buildings. Among his previous projects is a Tokyo cake shop encased in intricate timber latticework, a computing facility covered in hundreds of wooden strips and a Starbucks cafe with walls covered in criss-crossing beams.

The architect is also currently working on a latticed-timber stadium for the 2020 Tokyo Olympics. He was awarded the contract for the stadium following the controversial scrapping of Zaha Hadid's competition-winning design.

Hadid has since lamented the "remarkable similarities" the stadium has to her own proposal, but Kuma has denied the plagiarism claims saying was inevitable the designs would share basic attributes.