A new exhibition at the Pratt Manhattan Gallery in New York showcases a range of futuristic fashion concepts, including a shrug that reveals when the wearer is distressed and a dress with integrated lie detectors (+ slideshow).

The Coded Couture exhibition includes garments, jewellery and shoes fitted with technologies such as speech recognition sensors and heartbeat monitors, and created with methods ranging from 3D printing to hand-embroidery.

"Historically, the idea of customisation has always been at the heart of couture: the hand-beading, hand-stitching and other time consuming processes that reinforce the notion of the piece as a work of art with a specific connection to the owner," said curators Judy Fox and Ginger Duggan in a statement. 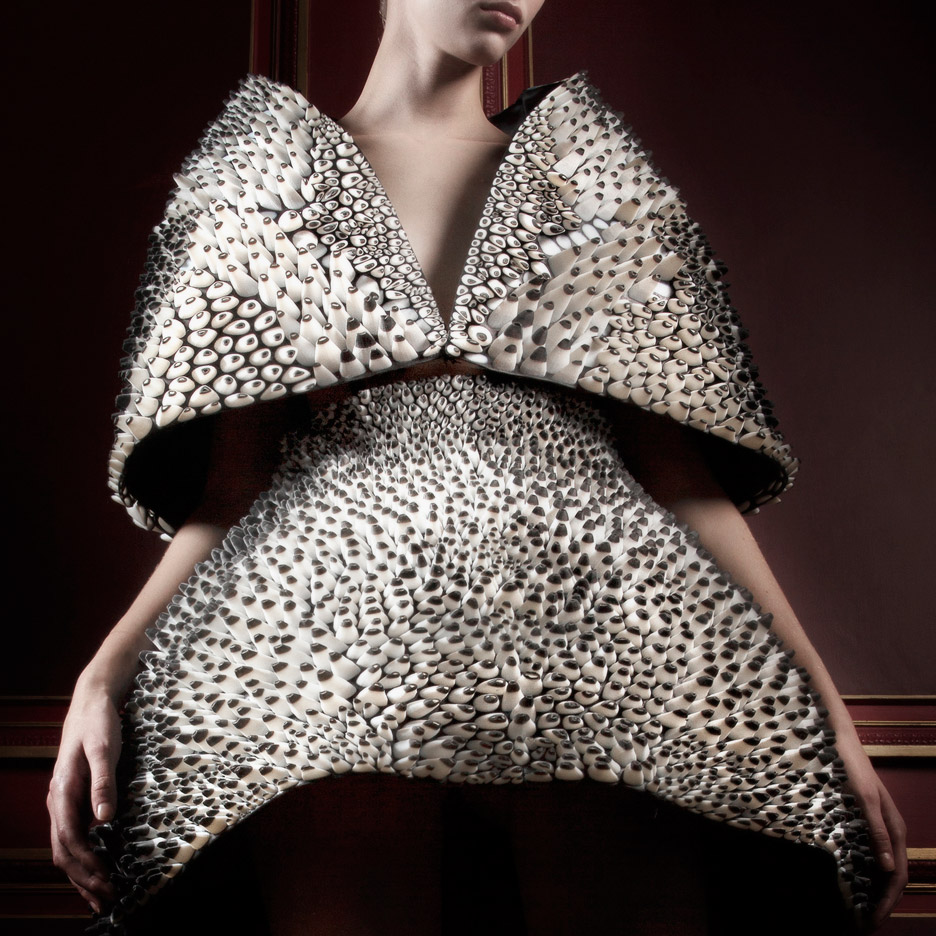 Techstyle exhibition in Boston explores how technology is changing fashion

"Coding provides a new approach to and perspective on personalised fashion, essentially a new iteration of couture," they added.

Many of the pieces in the show respond to physical actions. For instance, Rebecca Pailes-Friedman's Biowear shrug has embedded heart monitors that cause black chicken and coque feathers to ruffle when the wearer is anxious.

Melissa Coleman's Holy Dress uses lie detectors and speech recognition sensors to monitor the truthfulness of the person wearing it, as well as those around them.

The garment flickers during normal speech and produces a brighter, more sustained light when it picks up a falsehood.

Other works in the show are created with the user or consumer, which the curators term "synergistic".

The designers create a code or an interface that the end user manipulates to make something custom, like the 3D-printed miniature dresses based on a triangle pattern developed by Mary Huang.

Taking its cue from biology, Amy Congdon's handmade jewellery is based on ink-jet printed models of engineered tissue, to suggest how bracelets, ring, or necklaces could be grown from the body.

Curator Judy Fox stressed that most of the works in the show are conceptual projections and not even close to prototype stage.

"This is really a peek into the minds of theses designers," she told Dezeen. "They're really working at the forefront creating concept garments."

One exception is the CuteCircuit iMiniskirt, which reads tweets and displays patterns on its surface, a version of which was worn by singer Nicole Scherzinger.

The Pratt Manhattan gallery is located in Greenwich Village outpost of the Pratt Institute, an art and design school based in Brooklyn. Coded Couture in on view through 30 April 2016.

A similar show about how technology is changing fashion also recently opened at the Museum of Fine Arts, Boston.