Wall panels fold up to create tables for this cafe in Sicily, which Italian architect Giuseppe Gurrieri created by converting the old ticket office of a sports arena (+ slideshow).

Although originally designed as a ticket office, the shed-like structure had sat derelict for several years, so the local council invited different investors to propose alternative uses for it.

Giuseppe Gurrieri's design for the community-focused Eco bar formed the winning bid. Not only did the architect want to create dining spaces inside the building, he suggested creating outdoor seating that extends from the walls.

"The main goal is to recover the building and simultaneously to improve the quality of the surrounding built-up area in a highly critical neighbourhood," he said.

To revitalise the building's exterior, a new low-cost cladding was installed. Cement panels cover the two gabled end walls, coated in a layer of render, while the two longitudinal walls and roof are now wrapped in reclaimed wooden boards.

Folding panels are integrated along the side of the building that faces the road, creating the occasional tables. The spaces beneath also double up as storage areas. 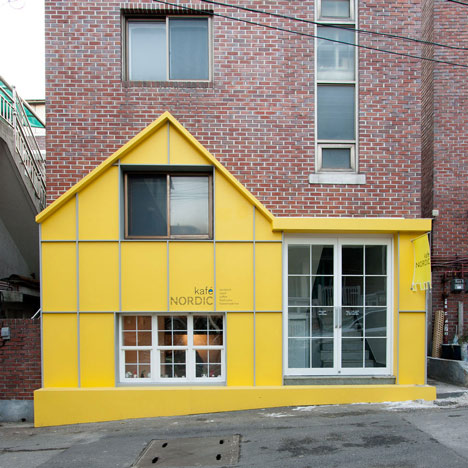 All of the wooden boards are painted yellow to unify them in tone. Original windows are concealed beneath the wood, but gaps between the boards allow light to filter through.

"The openings on the side facades are shielded by the new filter, but two large windows – the one on the entrance and the other one aligned on the opposite face – open up a view on the urban landscape," said Gurrieri.

Inside, around half of the interior is taken up by a simple dining area and cafe counter. The other half accommodates the kitchen, storage areas and toilet facilities.

Furnishings are kept simple, but a few details give the cafe its character. These include exposed concrete columns and beams, a concrete screed floor and a metal counter.