Geometric furniture complements the Cubist stylings of this Paris house by Moussafir Architectes, which also features a weathering steel facade and a large pivoting door (+ slideshow).

Jacques Moussafir's studio – whose previous projects include a house featuring patterned-cutout shutters – designed the two-storey property for a family with two children, on the city's Avenue du Faubourg Saint Antoine.

The house is located in a courtyard surrounded by much taller buildings, so light became a critical issue. This led the team to break the building up into separate blocks.

This interplay between solid and void references the Cubist style of art that emerged at the start of the 20th century, and influenced architects including Walter Gropius and Le Corbusier. It prompted the project name Cubist House.

"The Cubist combination of solids and voids offers an intelligent solution that brings ample natural light into the eight-metre-deep interior of a house surrounded by seven- and eight-storey buildings," said the studio.

"At the same time, the fragmented facade relates to the history of the site defined by successive additions and transformations."

A group of three volumes clad in pre-weathered steel flank a courtyard looking onto a small enclosed garden. The structures align with the buildings on either side and their staggered frontages contain large openings that optimise daylight and views of the greenery. 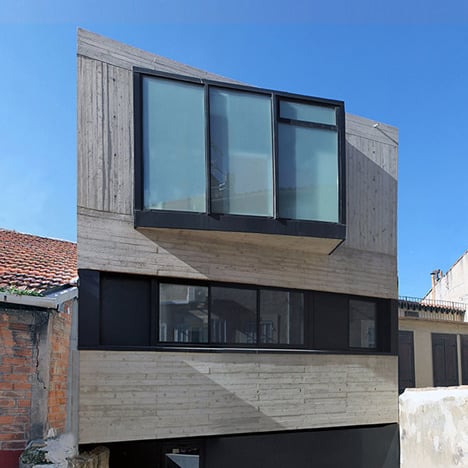 A large pivoting glazed wall swings round to open the kitchen onto the terrace and aid the building's natural ventilation, while the full-height window of the adjacent living room looks straight onto the outdoor space.

The relationship with the garden is enhanced by the natural patina of the rusted steel and exposed stone, which also references the neighbourhood's historic buildings.

"Here, more than anywhere else, we felt it necessary to opt for dense materials that would dialogue with the cobblestone paving, old masonry and lime plaster, all of which tend to patinate and thus testify the passage of time," Jacques Moussafir told Dezeen.

The connection between the exterior and interior is also expressed through the material palette. The weathered steel is used for some of the internal surfaces and is complemented by raw concrete and dark wood.

On the ground level, the concrete floor is interrupted by sections of parquet that match the dimensions of the suspended rooms on the upper floor.

The geometric division of the floor space is echoed in the cubic forms of the freestanding furniture.

A void at the rear of the house exposes the masonry wall of the neighbouring building and contains a staircase leading to bedrooms on the floors above.

The staircase is made from metal grille to ensure daylight flooding in from a skylight filters down to the lower levels.

Moussafir Architectes is based in Paris. Other projects by the studios include a concert hall covered with a quilt-like material, and a house with deep-set larch windows.

Photography is by Herve Abbadie, unless stated otherwise.