A pair of terraces are hidden behind the board-marked concrete facade of this townhouse in Marseille, which was designed by ACAU Architects for a young family.

French firm ACAU Architects was asked to create the 140-square-metre residence for a couple with two children on the outskirts of Marseille, France.

Built on a budget of €220,000 (£164,000), Cap House is designed to maximise its narrow plot between two existing residences and features a jutting bay window and a concealed roof terrace.

The house features board-marked concrete walls designed to help distinguish the residence from its neighbours, which have smooth rendered or brick facades. 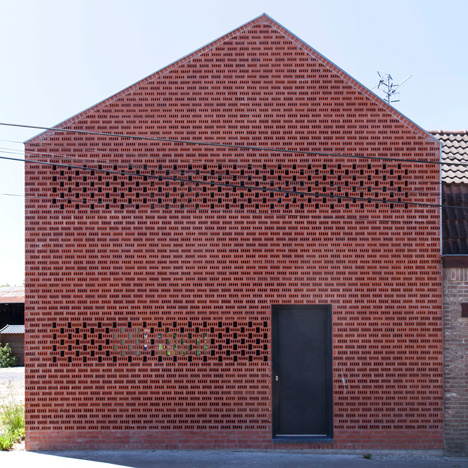 "The nature of the site, the budget constraints and the complexity of the programme made us quickly reflect on the optimisation of the structure and on the definition of supporting facades," said the architects.

"Between integration and rupture, the project has slipped into a very eclectic architectural context," they added.

The concrete structure also allowed the architects to create large open-plan spaces without the need for columns.

As a result, the upper floor living space is flanked by glass walls, which allow light to shine through a wedge-shaped bay overlooking the garden at the north to a decked terrace at the south.

"Facades of this project are made of rough concrete that allowed us on the one hand to establish levels completely crossing and without any posts, on the other hand to define a radical aesthetic which stand out from surrounding buildings," explained the studio.

A guest bedroom, garage and workshop located at ground level have direct access to the garden, while two children's rooms and the master suite on the floor above sit against the glazed facades.

Narrow concrete stairwells connect the three storeys, spanning the width of the house against the eastern party wall.

"This space is imbued with light and promotes the free flow of air from the bottom up, providing natural ventilation for the house," said the architects.

Marseille is best known as the home of Le Corbusier's 1952 Unité d'Habitation, a huge concrete housing block with a béton-brut concrete structure that is raised above parkland on chunky pilotis.

The roof of the iconic Modernist scheme is frequently used for art exhibitions, and since 2008 the resident of apartment number 50, Jean-Marc Drut, has invited notable designers including Jasper Morrison, Ronan and Erwan Bouroullec, and Konstantin Grcic to restyle his home.