Behind the aged stone walls of an old tannery building in northwest Spain, Arrokabe Arquitectos has created a small events venue that opens onto a neighbouring park (+ slideshow).

Located in Santiago de Compostela, the building previously housed a tannery's drying area, complete with a kiln. Arrokabe Arquitectos has completely overhauled the interior, creating a two-level space that can be used for exhibitions, talks or performances.

One of the conditions of the brief was to retain the existing stone masonry walls, despite their depleted condition. These chunky structures frame the building's north, south and east facades.

Rather than completely repair the walls, the Spanish architects chose to embrace their imperfections where possible. The street-facing east wall was left much the same, complete with sprouting plants and minor stains.

On the south facade, a series of new openings were introduced, and these have been infilled with contemporary windows and linked by a long steel-framed balcony.

More work was required for the north-facing wall, as it was punctured by a large hole. This had to be filled in, and the replacement area is rendered white to offer an obvious contrast with the old stonework.

"The project recovers the volume of the original cover, based on traces marking the slabs," said the architects.

"We did not reconstruct the entire volume, thus emphasising the character of an open, unfinished piece."

Named Catalizador Belvís, the building is set within the city's Parque de Belvís. The slope of the grassy terrain allows both of the two storeys to meet the ground at different points.

The ground is lowest on the western side of the building – the only wall not constructed from stone. This created an opportunity to open the interior up to the park, so the architects inserted a glass wall and a projecting timber box here.

The windows that project out from the south wall are also surrounded by timber, to match. 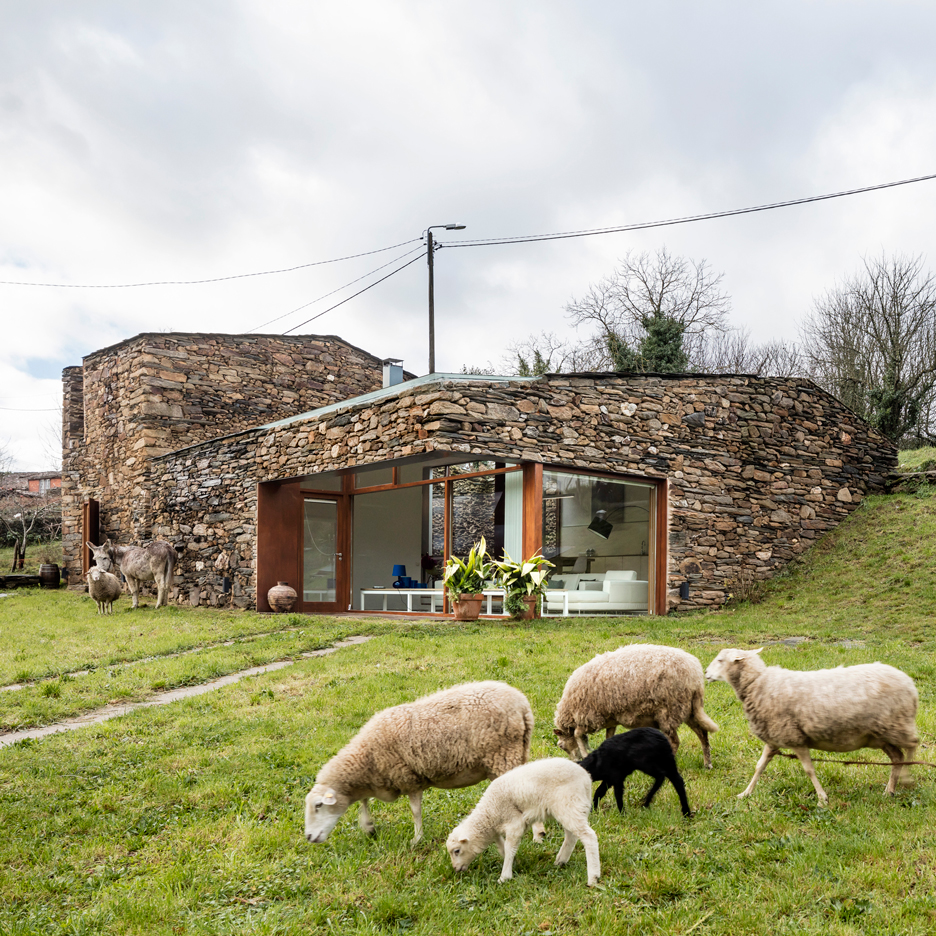 "This arrangement allows a permeability, which establishes a direct relationship between the building and the outside, and suggests various possibilities of use," added the team.

Inside, a secondary structure was built behind the walls to offer protection from the elements.

It utilises various low-cost materials, including engineered wooden particle board – otherwise known as oriented strand board – and wood-based insulation panelling.

The ground floor was given a new concrete floor, and wooden flooring was installed upstairs. Steel rods were also also added to offer structural support.

Arrokabe Arquitectos is led by architect brothers Óscar and Iván Andrés Quintela, and is based in Santiago de Compostela. The pair also recently completed another project nearby, the renovation of an 18th century house.

The Galician city's Old Town has been listed as a UNESCO World Heritage Site since 1985, thanks to numerous Romanesque, Gothic and Baroque buildings, so the majority of architectural projects in the city are renovations.

But it has seen the arrival of one major new building in recent years – Peter Eisenman's Cidade da Cultura de Galicia.