This galvanised metal office block by Japanese studio Ninkipen! is slotted into a narrow gap between two Tokyo buildings, and has an interior with an intentionally unfinished appearance (+ slideshow).

Architect Yasuo Imazu, who works under the name Ninkipen!, designed the 211-square-metre offices for the interior construction company &S Tokyo, which is based in Shinagawa Ward.

&S Tokyo has worked on a number of shop fit-outs for the Australian skincare brand Aesop, including one designed by Torafu Architects that is filled with metal pipes and lighting previously used on squid fishing boats.

The interior of its Ninkipen!-designed offices has an unfinished appearance that is popular among Japanese architects.

"When I considered that they undertake precision construction, I believed that the bared structure without a finishing coat is most appropriate design for them," said Imazu. 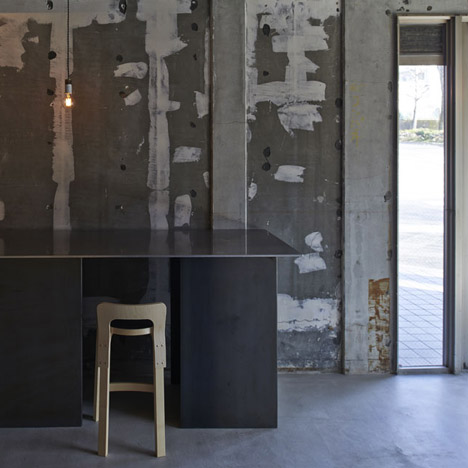 Metallic shutters draw up from the building's frontage to provide access to a parking space in the base of the building, while a separate entrance for pedestrians opens into a narrow stairwell.

This metallic staircase leads to the first-floor offices, where a suspended black staircase provides access to a smaller second floor.

Braced galvanised beams are left exposed across the walls and ceiling of the offices, which are furnished with wooden desks and storages.

The back wall of the first floor is covered in earth-toned plaster, and is intended to both off-set the extensive metalwork and act as a further reference to the company's trade.

"The ceiling lights throw light over it. It is a symbol of respect for expert's technique and makes a warm atmosphere in opposition to galvanised pillars," said the architects.

"The office is going to be the place to create precious interiors used by many people."

Among Ninkipen!'s previous projects are an atelier for a Kyoto clothing brand that features a patchwork of raw materials, a residence that is raised on pilotis above its uneven plot in Nara and a cafe in Osaka that is arranged around a small Jabuticaba tree.

More architecture and interiors by Ninkipen!