Japanese architect Ninkipen! has completed a house in Osaka Prefecture, featuring a metal surface that appears to be peeling up from the structure (+ slideshow).

Located in Neyagawa, Gandare is a narrow three-storey house slotted in between existing buildings in a busy residential neighbourhood.

Unlike its more traditional neighbours, the 88-square-metre residence has a simple rectilinear form with a flat roof and slender-framed windows.

Its facade is covered with a coated steel cladding, which curls up at the base to create a canopy for the entrance.

Inside, the property features a straightforward layout, with few rooms on each floor. This ensures there is plenty of light, even though there are just a few windows and a skylight.

Ninkipen! – whose previous projects include a tiny gabled pharmacy and a house on pilotis – sees the project as a model for the community, where many existing houses are being replaced with taller and more fire-resistant alternatives.

"I considered what kind of a design of a house is able to participate in the renewal of the city," explained the architect, whose real name is Yasuo Imazu.

"I arranged the positions of the windows in plan, cross section and elevation, by taking advantage of many restrictions on wooden houses in quasi-fire prevention districts."

On the ground floor, a parking space sits in front of an entrance, which leads though to a compact lobby. Rooms on this floor include a bathroom, a storage area and a dressing room. 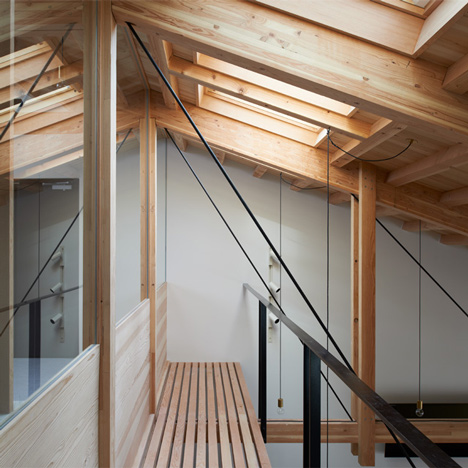 A living and dining room occupies the entire first floor, while the second floor houses a large bedroom with a mezzanine loft above.

"I designed the first ceiling and the second ceiling low to increase the height of the third ceiling," explained Imazu. "The design makes the daily life of people who live there rich and joyful."

The building's timber frame is left exposed throughout the interior, and is matched by the staircase located at the rear. This stairwell is partitioned off with glazing, as is a secluded balcony on the side of the bedroom.

"The inner balcony and the stairs, separated from the living room with wood fittings, serves as the veranda," said the architect, describing his aim to create an "indefinable boundary between the inside and the outside".

Furnishings are kept simple, but a few unusual details are included, from a ladder mounted onto a wall to recessed shelving, and a kitchen worktop with a cement finish.

Ninkipen! is based in Osaka. Other projects he has completed include a bakery where bread is displayed on a wooden sleeper and an office with a bubble facade.