This football stadium in Montreal has a giant faceted roof structure, which folds over an indoor playing field before morphing into spectator seating surrounding a second open-air pitch (+ slideshow).

The Stade de Soccer de Montreal was designed as a collaboration between Canadian studios Saucier + Perrotte and HCMA.

It is located on the former Miron Quarry and landfill site, which is in the process of being converted into the city's largest park.

The stadium's most striking feature is its huge faceted roof, which is intended to reference the site's mining history.

"The new soccer centre emerges from the park's artificial topography as a layer of mineral stratum recalling the geological nature of the site," said the architects.

"The mineral stratum is articulated by a continuous roof which cantilevers over the entry plaza and folds down over the interior soccer field," they added.

"The park's immense size called for an architectural intervention of grand scale, a truly unique gesture in the city."

The roof has a structure of cross-laminated timber – an engineered material made up from thin layers of bonded wood, which in this instance is locally sourced black spruce. 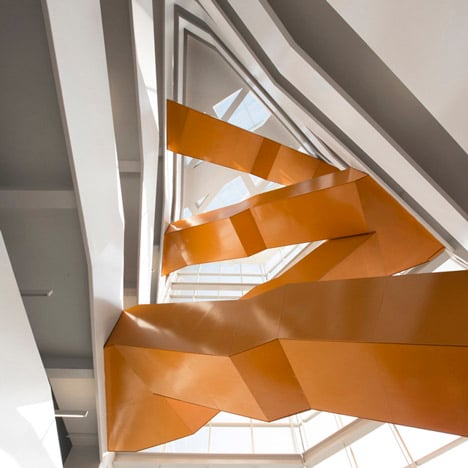 The bonded layers give the engineered wood significantly more strength, so architects are increasingly selecting it as a lightweight and sustainable alternative to concrete and steel.

"The structure of cross-laminated timber is the only one of its kind in the world," said the architects.

"Cross-laminated timber provides new design possibilities, facilitating the construction of structures with a pared-down, organic look and allowing free rein architectural creativity," they added. "It is a construction material that is light, cost-effective and sustainable."

Developed in partnership with Canadian engineers Nordic Structures, the roof is supported by 13 crisscrossing beams that measure 69 metres in length.

These are left exposed on its underside structure and highlighted by the strip lights used to illuminate the indoor pitch.

Inside, the two floors are arranged around a main corridor linking the interior and exterior pitches.

At ground level, the corridor runs alongside a series of glass boxes containing event spaces, a restaurant and offices, before leading directly to the spectator stands. The first in this succession of volumes is tinted orange to highlight the stadium entrance.

Locker rooms, and fitness and physiotherapy rooms are all located on the upper level.

"Despite the magnitude of the programme, the luminous elements and preserved vegetation give the architecture a critical human scale that respects the residential neighbourhood it faces," said the team. "The transparency of the building also promotes a sense of openness."

Two arms branch out from the main faceted structure, forming sheltered bleachers that flank the outdoor pitch. The arms are integrated into an artificial bank that was added to protect existing trees on the site.