The Family bench pairs an oblong padded leather seat with a small circular marble tabletop, that's held on a slender metal arm that extends out from the furniture at a right angle.

The seating is described by the studio as "a tribute to Bauhaus", using a minimal amount of material and "enhancing the aesthetic appearance to a maximum".

"This interconnected tray and bench was born with the simple life in mind: it can be used in hallways, cafes or any other public spaces," said Afteroom.

The collection's tables echo the shape of the bench, featuring similarly slim tubular steel legs and round lacquered tops. The furniture is designed for public spaces such as bars and restaurants, and was created to be light and easy to move around.

The pieces are available in either black or white, and come as taller bar-table versions, or shorter cafe-style designs. 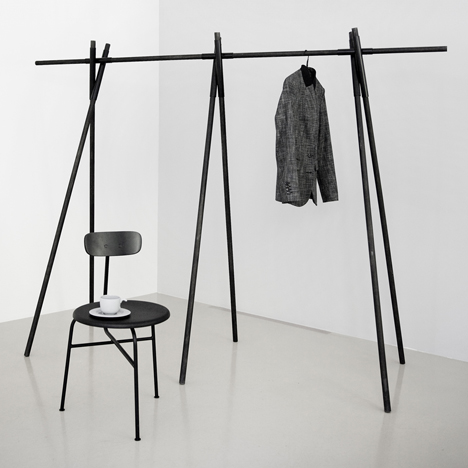 The studio has also designed matching three-legged chairs, originally created in 2012 and released by Menu in 2014. The designs feature small oblong backs held on bent metal tubes, which extend out from underneath the seat.

The entire Family collection will be shown at this year's Salone del Mobile furniture fair, which takes place in Milan from 12 to 17 April 2016.

In 2014, Afteroom partnered with Menu on a coat hook, lounge chair and bar stool in a similar style, described by the studio as "Bauhaus Modernism".

The brand has also worked with Rotterdam studio WM on a pair of chairs with contrasting wire lattice backs, and with Note Design and Norm Architects on a collection of patchwork marble tables.