Milan 2016: products made from a new material that uses recycled poo are presented in darkened rooms with crap-covered floors at The Shit Evolution exhibition curated by the Museo Della Merda (+ slideshow).

The exhibition, located at the Società d'Incoraggiamento d'Arti e Mestieri (SIAM) art school, comprises a number of rooms filled with objects made out of a clay-composite material that uses processed cow dung.

These products are exhibited alongside artworks, video installations and fossilised faeces from 200 million years ago.

"We were horrified at the idea that shit was considered waste," curator Luca Cipelletti told Dezeen at the press preview last night. "So we mixed shit with clay to create Merdacotta – the new enemy of terracotta."

To produce Merdacotta, cow excrement is processed in huge industrial digesters where the methane and urea is extracted, which results in the foul smell being removed. The methane is then burnt to produce electricity, ensuring that nothing is wasted.

The resulting odourless dung is dried, mixed with clay and then worked into a variety of objects including tiles, flowerpots, flower vases, tableware and art pieces.

"The Merdacotta for the tableware is glazed and put in the oven, so there's no reason why people shouldn't use them," explained Cipelletti, who believes designers have a responsibility to use organic materials to create a more sustainable world. "Shit is a new material and I have to say, quite beautiful," he added. 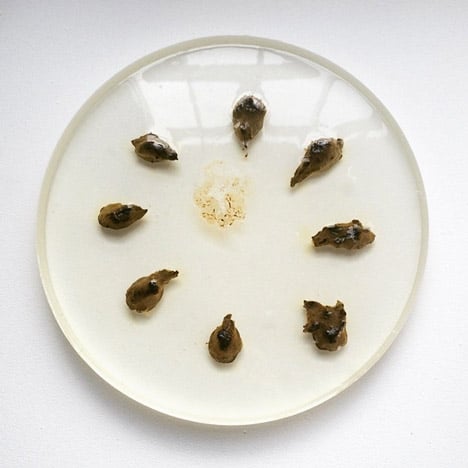 An outline of a room made out of Merdacotta bricks and tiles welcomes visitors to the exhibition in the courtyard of the school's palazzo, which was rebuilt in the 1880s by Francesco Pestagalli and still has Roman-era walls in the basement. Products for the home are displayed on the floor and a solitary toilet is positioned at one end.

In the basement, the Roman walls are used as props to display some of the Primordial Products collection of  Merdacotta pieces alongside a piece of coprolite – the 200-million-year-old fossilised faeces.

The first room features a projection showing photographs of the Museo Della Merda, also known as The Shit Museum, a dairy farm in northern Italy where 2,500 cows produce 30,000 litres of milk as well as 100,000 kilograms of dung every day.

A pyramid of six large cans made out of Merdacotta is placed at its centre, referencing Avant-Garde artist Piero Manzoni's Artist's Shit – a 1961 artwork consisting of 90 tin cans filled with faeces.

"Roberto mixed shit with a pigment that comes from the shell of an oyster as well as tar and red paint to create his canvases in this room," explained Cipelletti.

The floor of this room is also covered in dried, processed cow dung.

A television set in the next space shows the video Resurrection by Daniel Spoerri – a story of a poo that becomes a steak. Photographs outlining the Shit Museum's mission and philosophy are mounted on the walls.

A dining room for two forms the final part of the exhibition, with two toilets serving as seats. A television set plays an extract from The Phantom of Liberty by Surrealist Spanish filmmaker Luis Buñuel in which a dining table and a toilet are also coupled.

Last year The Shit Museum showcased projects that highlighted "what a useful and living substance crap really is" with a similar exhibition during Milan design week 2015.

Cipelletti said that he would like to build a pavilion made out of Merdacotta bricks next year, and eventually entire houses.

The Shit Evolution opens to the public today at SIMA on via Santa Marta 18, Milano, and will be open from 11 to 17 April during the city's design week.

Photography is by Henrik Blomqvist.