This patterned glass staircase forms the centrepiece of an apartment in Hong Kong, and leads up through a skylight to a roof terrace overlooking the bay (+ slideshow).

British architect Luke Lowings of Carpenter Lowings worked with American sculptor James Carpenter on the design for the stand-alone staircase, which forms the heart of the newly refurbished apartment.

At 5.5 metres metres tall, the staircase rises the full height of the two-storey space.

Above it, the four-metre-wide skylight in the roof helps to bring natural light into the interior, but also folds open to provide access to the roof.

"This staircase acts as a discrete and subtle sculptural element in its own right," said Lowings.

"It is both aesthetic, providing a strong visual focus for residents and visitors, and practical, modulating daylight to reduce the harsh glare and intense heat of the Hong Kong climate."

"The staircase's apparent weightlessness also helps to create the impression of a floating, ethereal structure rather than one which dominates the living areas," he added.

"The light of the sky is reflected from the structural glass panels, through the clear treads of the stair itself deep into the lower floor."

The skylight is raised by two hydraulic rams. It has in-built sensors that prevent it from closing on obstructions, but that activate closure during sudden gusts of winds.

An alarm sounds as the glass door shuts, helping to prevent residents from being accidentally trapped on the roof. 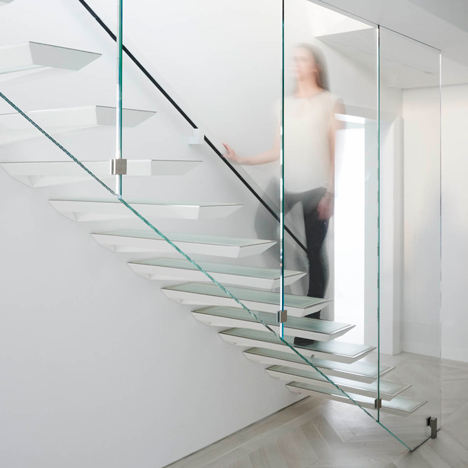 When closed, the skylight frames a view of the sky that is reflected in a pair of large structure glass screens partially enclosing the staircase.

These glass screens are printed with a linear pattern that is intended to be evocative of falling rain. Together with the reflections and veined marble surfaces of the hall, they create a disorienting effect.

"The design demonstrates how significant amounts of natural light can be brought into small, relatively compact spaces and transform them into bright, welcoming areas," said the duo.

The staircase is made from heat-strengthened laminated glass, and its parts are joined together by minimal titanium fittings.

Each stair tread is made from three layers of glass and supported by just three fittings.

Carpenter and Lowings founded their studio in 2001. They have since collaborated on glass installations for Norman Foster's Hearst Tower in New York and the city's Grimshaw-designed Fulton Street Station.

Photography is by Kitmin Lee, Edmon Leong and Carpenter Lowings.