Pre-rusted steel pyramids protrude down from the ceiling of this glazed office building, which Japanese studio NTA designed for a construction company in Chiba Prefecture (+ slideshow).

The steel-framed structure stands beside the company's huge metal-clad factory, where the triangular pieces of weathering steel used to construct the ceiling were manufactured.

The facets are fitted into an irregular grid structure to create a range of small and large pyramidal forms, which are intended to give the impression of a "floating terrain".

"The space is composed through means of a dynamic rhythmical grid, and in correspondence, surfaces that appear like overturned pyramidal roofs are poised in a hovering fashion," said Tsukada. 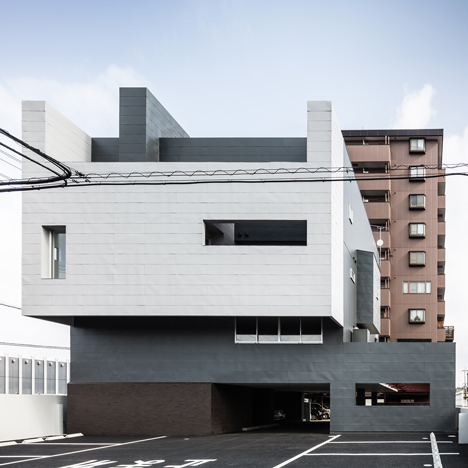 "Whilst the flat floor secures a sense of universality, the ceiling alters the atmosphere and comfort for each respective area."

Tsukada originally intended to apply this mountainous steel landscape to the office's floor, but decided it would be impracticable, as the brief called for an open and flexible space for workers.

"It was attempted to present the office floor as resembling the topography, however it was not possible to ensure a sense of universality for the space," he said.

"Therefore, the consideration had been to transcribe the topography on to the ceiling surface that existed as having the same surface area as the floor."

The metal surface references the steel construction work carried out by Daiei Iron Works. But it also creates a decorative roof structure, and helps to direct cold or warm air into the space from the air-conditioning unit.

"The selection of this material is of course not merely for cosmetic reasons, rather, it functions as a folded plate structure with a beam string effect that allows its small section to behave as beams in response to its span," added the architect.

Similarly faceted ceilings forms have been used by Abalos+Sentkiewicz Arquitectos for a high-speed railway station in northern Spain and by Emrys Architects for an extension to an estate agents in London.

Photography is by Tomohiro Sakashita.