This clifftop holiday home by British designer John Pawson presents white windowless facades to its guests, but at the rear large windows and a roof terrace face towards the sea (+ slideshow).

Pawson's London-based studio designed Okinawa House for a family who spend most of the year in Tokyo, but want to escape to the island of Okinawa during summer and winter holidays.

"As they live in a box-shaped house in Tokyo, the brief was for somewhere with a sense of vertical and horizontal expansiveness and the fluidity of the catenary [U-shaped] curve came up as a visual reference," said a statement from the studio. 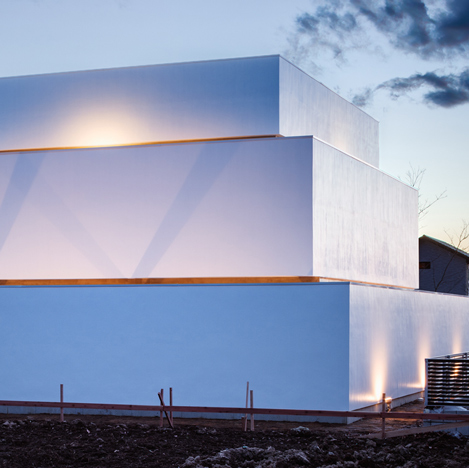 Japanese house hides a balcony and terrace behind tiered walls

The blocks have no windows at the front, providing privacy from passersby. The only entrance points are a grey garage shutter and a broad wooden door that is set back from the site's perimeter between two blocks.

The blocks funnel out towards the rear of the site, where glazed walls are angled to take in the best views of the ocean. A roof terrace is also nestled behind a parapet wall on top of the single-storey living space.

"The design traces the diagonal footprint of the plot, combining single and double-height spaces within a form that is closed and tapered to the rear, but to the front flares and opens like an eye over the headland, with the ground floor level raised to optimise sightlines to the ocean," said the studio.

Minimalist interiors, typical of Pawson's architectural style, are furnished with white and wooden pieces, as well as polished stone floors.

One sideboard with an integrated seat extends through the sliding glass walls of the living room into a sheltered porch, helping to create continuity between the two spaces.

John Pawson is currently reconfiguring the former Commonwealth Institute in Kensington to provide a new home for London's Design Museum, while work is nearing completion on his holiday home for Alain de Botton's Living Architecture project.

The designer has also applied his pared-back architectural style to a range of oak furniture with inverted V-shaped legs and the interior of fashion designer Christopher Kane's first physical retail space.