Architect Joshua Florquin has used wooden panels to create angular furniture elements inside a doctor's surgery in Belgium, ranging from a multi-level reception desk to a series of boxy cubby holes (+ slideshow).

Florquin, who has offices in Paris and Ghent, was tasked with developing an interior design strategy for the entire surgery, which is located in the village of Maldegem.

The architect chose just one material for all of his interventions – an engineered wood panelling with a tulipwood veneer – and used it to build walls, surfaces and furniture elements.

"Particular attention is given to light and materials that influence the state of mind in a positive way," said Florquin. "The tulipwood gives a soothing bright atmosphere."

Medical Practice De Schuyter is rectangular in plan, with the reception and waiting areas at one end, and the consulting rooms at the other. The wooden additions feature on both sides, helping to unite the different areas.

In the waiting room, the wood panels form benches that run along both sides of the space. Rather then extending straight along the walls, these are gently angled to create what the architect describes as a "serpent-like form".

The boxy cubby holes divide one of the benches, creating spaces for storing books. There are also shelves at the rear of the space, where a selection of titles can be displayed.

"When a patient visits the practice, according to his mental and physical state, he can choose to sit with other patients or search privacy and sit alone in one of the islands," explained the architect. 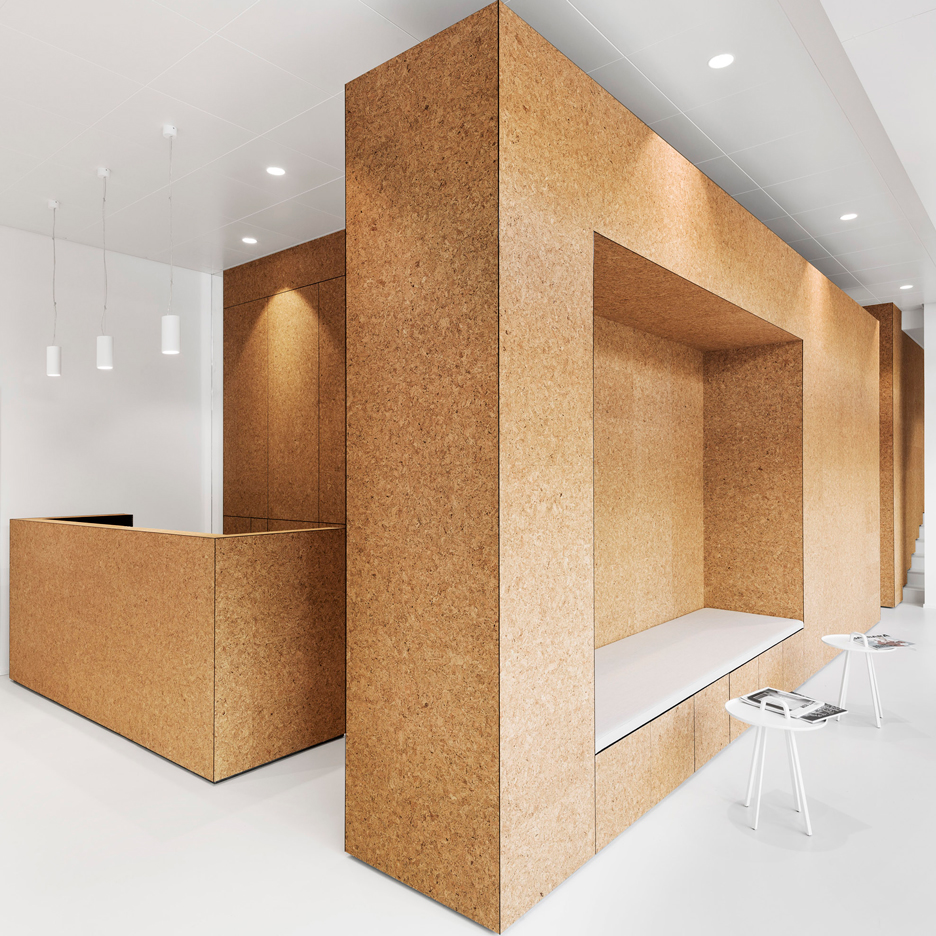 "The facing benches are not parallel but have a skewed zigzagged form in order to naturally avoid a direct eye-contact, if wished," he added.

Behind the waiting area, a wooden box encloses the reception office, as well as a kitchen, toilet and a storage archive.

A receptionist's desk is built into the box, as is a counter that can be used into patients. It is divided into three sections, all serving a different use.

"The highest volume is the desk where documents can be laid or handed over," said Florquin.

"The middle-height volume can be used to rest handbags on and finally a third lower volume is in the form of a niche, where children can take a small toy when leaving the doctor's office."

In the two consulting rooms, the tulipwood panels form desks and create partitions in front of the examination areas.

The material also covers a cuboidal volume between the two rooms and provides a front for cupboards.

Florquin founded his studio in 2014. Past projects include a Parisian hair salon, which features a ceiling decorated with hexagons.