MVRDV has used a pioneering glass technology to replace the brick facade of a former townhouse in Amsterdam with a transparent replica, more suited to the building's new use as a Chanel boutique.

Described by the Rotterdam studio as the first of its kind, the innovative facade of Crystal Houses Amsterdam uses glass bricks, windows frames and architraves to recreate the city's traditional architectural style.

The glass bricks are held in place with a transparent high-strength glue. According to MVRDV, the construction is "in many ways, stronger than concrete", as was proven during the testing process.

Towards the upper storeys, the glass elements merge with the original terracotta brickwork to create the illusion of a dissolving wall. 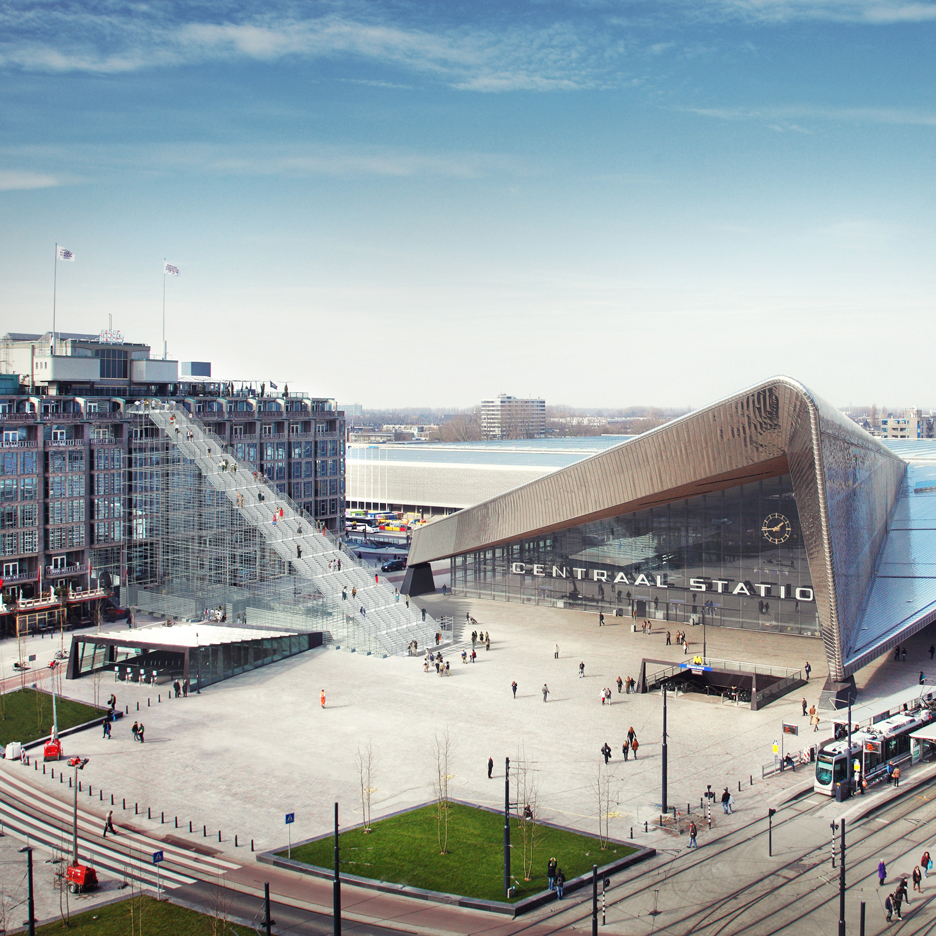 The architects believe the technology offers a solution to the loss of local character in city centres around the world, many of which are now dominated by plain glass shopfronts.

"We said to the client, 'Let's bring back what will be demolished but develop it further'," said Winy Maas, one of the three co-founders of MVRDV.

"Crystal Houses make space for a remarkable flagship store, respect the structure of the surroundings and bring a poetic innovation in glass construction," he continued.

"It enables global brands to combine the overwhelming desire of transparency with a couleur locale, and modernity with heritage. It can thus be applied everywhere in our historic centres."

Crystal Houses, now home to the Chanel boutique, is located on PC Hooftstraat, a former residential street that has become a hub for luxury fashion brands like Prada, Dior and Rolex.

Many of the buildings on this street have lost elements of their original architecture. MVRDV didn't want to do the same, but the studio's idea to recreate the original facade in glass had never been tried before.

After developing the concept, the studio worked with specialists to develop the technologies to make it a reality.

Researchers from Delft University of Technology partnered with engineering firm ABT and contractor Wessels Zeist to test structural solutions and fabrication techniques.

A team of Poesia glassmakers in Venice cast the bricks from solid glass, while German company Delo Industrial Adhesives provided the high-strength glue.

High-tech lasers and laboratory grade UV-lamps were required in the manufacturing process. Milk was also used, as its low transparency made it useful during the levelling of the bricks.

"Six to 10 experts worked every day for a whole year in a place that bore more resemblance to a laboratory than a construction site," said MVRDV in a statement.

The firm sees Crystal Houses as a starting point for reimagining the future of glass in construction.

One of the main advantages is that the material is completely recyclable. During the installation, several imperfect bricks were melted down and remoulded – in fact, the entire facade could be reformed in the future.

MVRDV was founded in 1993 by Maas, with Jacob van Rijs and Nathalie de Vries. The studio often uses a lot of glass in its buildings, with examples including a pyramid-shaped library and a hotel in a giant greenhouse.

The team also experimented with the material for its Glass Farm shop and office complex in Schijndel, which combines flat glass surfaces with the form of a vernacular barn.

Photography is by Daria Scagliola and Stijn Brakkee.