Milan 2016: in response to the vast amount of finished products on show at Milan design week, a group of graduates from Design Academy Eindhoven decided to exhibit only materials (+ slideshow).

The group of nine students, who all graduated from the Dutch university last year, came together to showcase the unseen steps of the research process – resulting in a colourful material-focused exhibition called Envisions.

"I call it an archive of ideas," Iwan Pol, one of the exhibiting designers, told Dezeen. "We want to show people what happens before something becomes an end product, which is what you see a lot here in Milan."

Designs on show at the exhibition include an experiment with concrete by Pol, a series of woven wood pieces by Simone Post, and a collection of 3D-printed "futuristic objects" by Bastiaan de Nennie.

Pol, along with fellow students Simone Post and Sanne Schuurman, began the nine-person Envisions collective in hopes of creating a more open dialogue between designers, clients and manufacturers.

At their monthly meet-ups, each designer lays out their work in the middle of the room. The group then have open discussions about each piece and how it could develop. 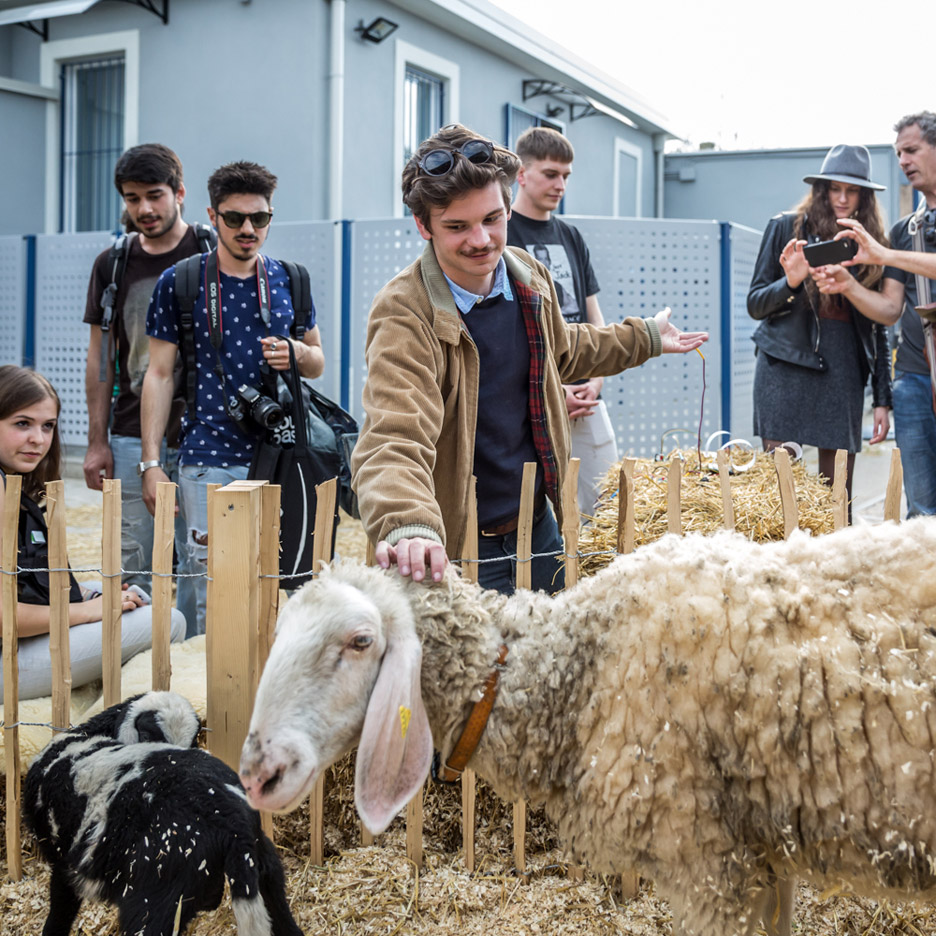 Pol believes that the exhibition will allow for unexpected developments in the making process, and will ultimately provide the designers with joint ventures.

"What we wanted to do with this is really get the people involved and show them the starting points of some ideas," he said. "For all these starting designers it's hard to find work, and we thought by combining all this creativity at once and getting people to come see it, maybe collaborations could form out of something that isn't really something yet."

In an interview with Dezeen, Andrea Trimarchi of Formafantasma – who teaches at Design Academy Eindhoven – said its students no longer aspire to be famous designers and instead want to work in industry.

"We are really seeing a shift," Trimarchi told Dezeen in Milan last week. "They used to want to work by themselves and now they actually want to work for other people."

He said that about half of his students were working on material research projects – something which is attractive to big companies.

"There is interest from those big companies to work with younger designers," he said. "But they are not looking for authors. They are more looking for people who can think and develop processes."

Trimarchi's comments echo those made by the school's director Thomas Widdershoven, who told Dezeen that the school has undergone a "paradigm shift" with students now more interested in responding to real-world problems than making beautiful objects for collectors.

For an exhibition called Touch Base at this year's Milan design week, another group of students responded to the "overwhelming presence of technology" by designing objects and installations that are all made to be touched.

Other exhibitions that took place during the city-wide event included Nike's Nature of Motion installations by ten international designers, and The Shit Evolution showcase of products made from recycled poo.