Milan 2016: plans for an oversized armchair that would be formed inside a growing tree trunk and a massive logo that changes colour with the seasons featured in Dutch designer Maarten Baas's New! Newer! Newest! exhibition (+ slideshow).

Baas's Tree Trunk chair would take 200 years to produce, and would be grown using a mould pressed into a tree. Over time the trunk would gradually grow over the shape, allowing the mould to be removed and a chair to be "harvested".

The concept for the furniture was developed with British designer Gavin Munro, whose Full Grown company creates pieces by training trees to grow into the shape of chairs and tables.

The Tree Trunk chair would be created from a tree planted in the Groninger Museum's Menkemaborg garden, and will be added to its collection once fully grown in approximately 2216.

"The main role of the museum is to take care of the tree after I have passed away," the designer told Dezeen. "The tree and mould need constant maintenance. Unexpected things will happen in the growth, so it's a collection piece that needs special care." 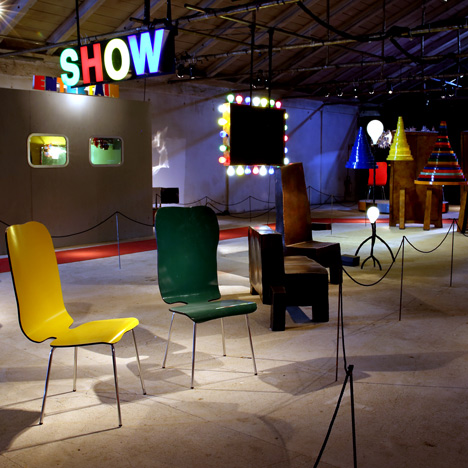 Maquettes, renderings and models of the armchair were shown at the designer's New! Newer! Newest! exhibition, which was displayed at Via Savona 33 during this year's Milan design week.

The show also included plans for Baas's New forest concept, which would see trees planted in formation according to the colour of their foliage. As the leaves grow and chance in shade, the shape of a logo would be revealed from above – with its colours changing across the course of the year.

This movie shows how as the leaves grow and change in shape throughout the year, the logo would be revealed in the forest from above

"With new techniques – such as Google Earth or drones – we increasingly familiarise ourselves with the view of earth from above," said Baas. "From this perspective, one could see the planet as a sculpture, or a canopy as a canvas."

The logo forest would inhabit a 120-hectare-plot on Flevoland – a manmade island in the Netherlands – and would be planted in partnership with the country's Forest Commission.

Baas often uses unusual materials and techniques to create his furniture and installation projects. His career was launched by the success of his 2002 Smoke chair, which was singed with a blowtorch, and his previous work includes a clock formed by two men with brooms pushing lines of debris to create moving hands.

Other exhibitions during Milan design week, which took place from 12 to 17 April 2016, included furniture brand Gufram's showcase of furniture from its archive, and Formafantasma's trio of installations that referenced the form and material's of Lexus' LF-FC concept car.