Milan 2016: Chinese studio MAD Architects has created a door handle based on the shape of the firm's skyscrapers in Mississauga, Canada, which have been nicknamed the Marilyn Monroe Towers.

"A door handle is very symbolic to me," said MAD founder Ma Yansong. "It is the first object that one will interact with before entering a new space."

"Therefore, we wanted the design to be smooth and organic so when your hand closes around it, it feels familiar and natural, even if it is the first time you touch it."

To create the form, the studio looked to the undulating buildings it completed in Mississauga in 2012 and are officially named the Absolute Towers. 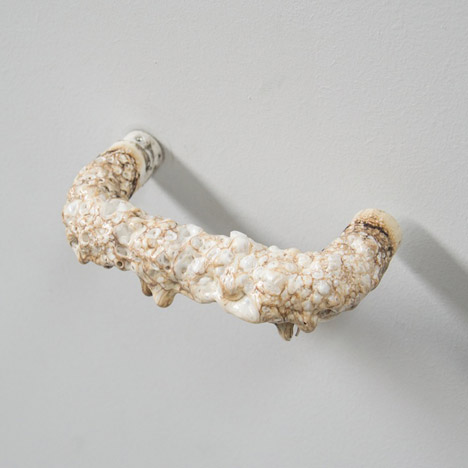 The studio won a competition to design the towers in 2006, when they were quickly likened to American actress Marilyn Monroe because of their curvaceous shapes.

Monroe was an actress and model who starred in variety of films during the 1950s, and became an icon of the decade.

Both the skyscrapers and the door handle have an oval cross-section that gently twists from one end to the other.

The shape is designed so the hand can comfortably grip the horizontal metal bar, which is available as a polished version and brushed variations in light or dark grey.

"Architecture is about experience, not only visual but also what you can touch, what you can feel," said Yansong. "This handle allows you to connect with the form and design in a way you can't do with a building."

Olivari presented the handles at last week's Salone del Mobile furniture fair in Milan, where other product launches included a range of unusual bathroom taps by designers such as David Adjaye and Front, and a smart kitchen countertop that integrates various interactive functions.

Founded in 2004, MAD operates offices in both Beijing and Los Angeles. The firm is best known for its architecture projects based on traditional Chinese landscape paintings, such as the Chaoyang Park Plaza complex underway in the country's capital.

It also recently stretched gradated ribbons from the arcade of a Milanese palazzo for an installation during the city's design week.

Other architects that have designed door handles include Frank Gehry, John Pawson and Lina Bo Bardi.