This tea-fermentation facility by South Korean office FHHH Friends features a combination of opaque and perforated concrete walls, which also screen a cafe, restaurant and a house (+ slideshow).

Named the Ground Wall, the 742-square-metre building is located in Gimhae, a city in South Korea's South Gyeongsang Province.

It has four different uses – it is a tea-fermentation cellar, a tea rooms, a restaurant and a residence.

Tea fermentation takes place in large urns stored at ground level, while the tea rooms sprawl out across the first floor, and a traditional Korean restaurant and residence share the uppermost floor.

The complex is surrounded by scenic hills and basins to one side, but hundreds of trucks pass noisily along a main road on the other.

So the architects decided to give the building a resilient concrete and steel structure that would stand out from the rural setting.

"We chose not to be daunted by the gaze of the surrounding nature; we intended the structure to be seen as rough and heavy as possible," said the architects. "The Ground Wall chose to show off its power rather than to adopt itself to its surroundings." 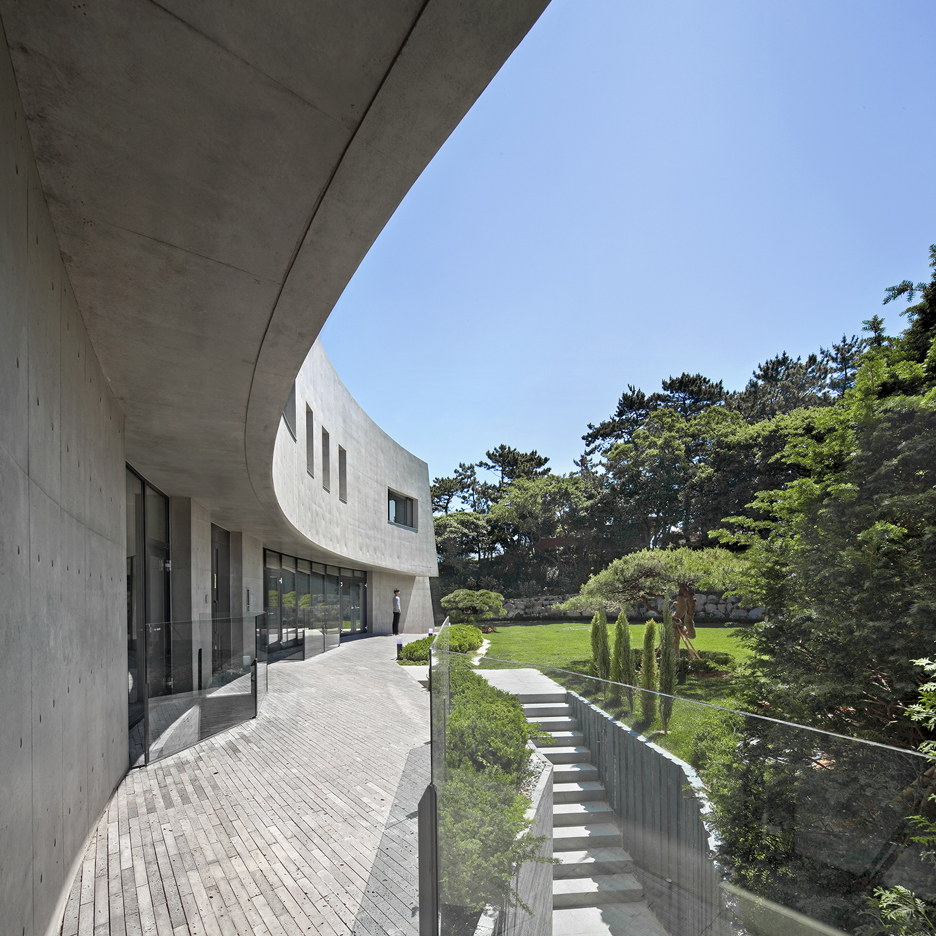 Sections of the facade are made up from C-shaped blocks of concrete that are stacked to create a patterned grille over more private areas of the building.

The same blocks are used as paving in the courtyard, allowing tufts of grass to grow between their crevices.

"The power of architecture must not be shown through the shapes only. It must be felt through the reality of the materials and the efforts that were devoted to realisation," said the architects.

"The 'power' we intended to show in this structure is not only the shape of the building, but also the original way of construction using each material's properties," they added.

"Even in the case of a trifle part of structure, we tried not to betray the historic power of the name. We tried to find right ways to construct that respect each material's property."

The majority of the building is made up of stacked slabs of solid concrete, joined together by metal pins. The tips of these pins protrude from the slabs and cast a subtle pattern of shadow across the facades.

"Those pins are usually discarded after concrete work completed, but we decided to leave as it is," the studio told Dezeen. "We focused on the shades the pins make, and we are fully convinced that the shades will make the building more plentiful."

A dark brick staircase with a cherry wood handrail leads from the courtyard up to the tea rooms, which spread out along the length of the L-shaped plan.

From here, a further staircase leads into the centre of the top floor, splitting it in two with a residence in one wing and a restaurant with a terrace screened behind the blockwork on the other.

Photography is by Kim Yong Kwan.