The geodesic structure would sit beside Fuller's iconic dome in an open area of the Parc Jean-Drapeau.

"Interacting like the sun and the moon, our concept engages in a poetic dance with Fuller's design, realising the park's potential in a contemporary context," said studio founder Dror Benshetrit.

The design would measure a similar size to the American Neo-Futuristic architect's project, which measures 76 metres in diameter and 62 metres in height.

But in Dror's version, a canopy would drape from the top of the structure to create another partially sheltered area around its base.

You don't need to be an architect to design buildings, says Dror Benshetrit

Its aluminium frame would also be designed for climbing vegetation to grow up and over the latticed dome, to help it blend into the park and help provide a sound buffer.

The design is being released a year ahead of the Expo's 50th anniversary in 2017, which is also Montreal's 375th birthday and Canada's 150th anniversary of Confederation.

Fuller's dome was built as the United States pavilion for the international exposition, where Moshe Safdie also presented his Habitat 67 housing complex. The dome was originally covered in transparent acrylic panels to maintain its internal temperature, but these burnt away during a fire in May 1976. 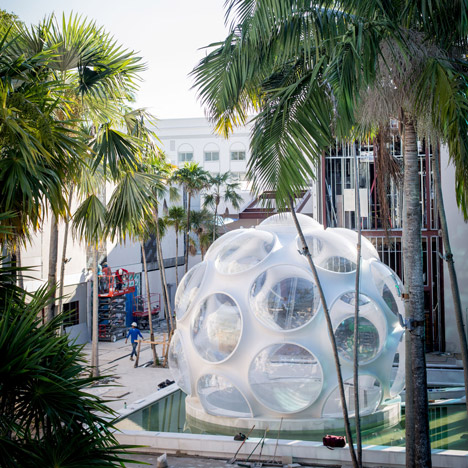 The steel truss structure remained, but the site stayed closed until 1990 when it was bought by Environment Canada. The organisation turned into an interactive museum, which opened five years later.

Studio Dror developed its proposal following a tour of the island with the Buckminster Fuller Institute. The aim was to provide an alternate idea to Parc Jean-Drapeau's current development plan and help the public visualise the potential for the site.

"As with 1967, 2017 is not just another celebration – it's the opportunity for a new beginning," said Benshetrit. "Our living dome is a catalyst for dreaming. The possibilities are endless."

Although a speculative project, the dome could feasibly be built within two years according to the studio.

Buckminster Fuller created a number of domes before his death in 1983, as part of his research into ways for improving human shelter. A much smaller structure conceived as an "autonomous dwelling machine" was installed in the Miami Design District in 2014.

Architect Norman Foster, who also owns one of Fuller's domes, discusses the significance of Fuller's Fly's Eye Dome and Dymaxion car in a movie filmed at a 2011 exhibition in Miami.