The cement lamp was released as part of Nemo's 2016 collection, which was unveiled during this year's Milan design week.

Le Corbusier, one of the most important pioneers of Modernist architecture, originally created the Beton lamp to illuminate walkways at his Unité d'habitation de Marseille.

"It is an incredible lamp, summarising all Le Corbusier's ideals regarding lighting: a pure yet functional volume, whose shape is plastic but efficient thanks to its massive concrete reflector shape," Nemo's head of design Valentina Folli told Dezeen.

"It is a shape that has inspired a number of other products but still the harmony of the original remain unsurpassed."

The new editions of the robust concrete piece will be available in two sizes: a large outdoor version, and a smaller desk-top size. 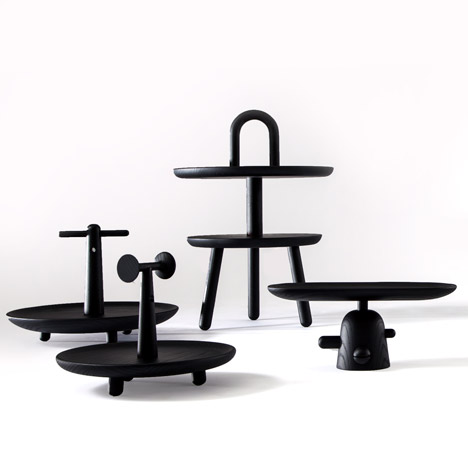 Although the production methods used to make the lamps remains largely the same as the originals, the lighting source will updated with an LED board.

The Borne Beton is the ninth Corbusier-designed lamp to be produced by Nemo. Others include the Projecteur light designed for India's Chandigarh High Court in 1954, and a curving brass floor lamp named Escargot.

Its price will be announced at the commercial launch in May.

"After the launch of the Projecteur 365 outdoor, we believe it was the right time to re-edit the Borne Béton – it is a very peculiar outdoor lamp, with the volume of a mile stone and the shape of a nautical bollard," said Folli.

Le Corbusier is commonly regarded as one of the architectural masters of the 20th century. Born in 1887 under the name Charles-Édouard Jeanneret, he coined the pseudonym in the 1920s, before going on to design iconic buildings such as the Villa Savoye and the Chapel of Notre Dame du Haut.

Nemo's 2016 lighting collection was unveiled during Milan design week, which took place this year from 12 to 17 April.

Other lamps launched during Milan design week include a cordless light that generates its own electricity to additionally charge a smartphone, and a range of material-focused pendants by British designer Tom Dixon.